The Tampa Bay Rays and New York Yankees face off on Saturday in an American League West MLB showdown at Tropicana Field.

These two teams faced off on Friday and it was the Rays that were able to come away with the 10-5 victory. Brandon Lowe was the best player for the Rays finishing with one hit and three runs driven in.

The Yankees haven’t been awful to start the season, but they probably feel like they should be in a lot better position right now. Aaron Judge has been the best player for the Yankees this season hitting two home runs and driving in five RBI’s.

On the other side of this matchup is the Rays who had lost four games in a row before winning on Friday. The pitching staff has been an issue for this team this year and even on Friday they gave up five runs. Joey Wendle has been the best plate for the Rays hitting one home run and driving in seven RBI’s.

Domingo German will get the start for the Yankees and in his first start of the season he struggled going only three innings giving up four hits and three runs.

On the mound for the Rays will be Chris Archer who had some major struggles in this first game of the season. He has only pitched two innings on the season and he currently sits with a 13.5 ERA.

Both of these pitchers are going to get hit hard in this game and this one will go well over the posted total. Back the over to cash with ease. In terms of the side, it's a lean to to the Rays to win this game as underodgs, but the strong player is with the over to cash. 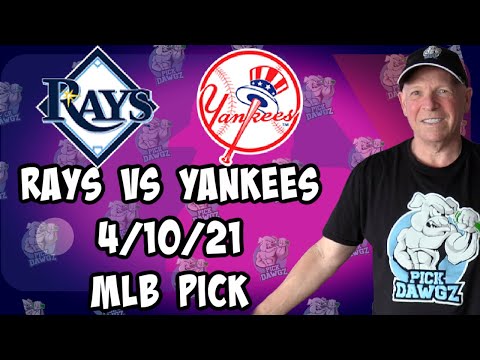