The Los Angeles Angels face the Toronto Blue Jays on Saturday, April 10th at TD Ballpark for game three of a four-game series.

The Los Angeles Angels defeated the Toronto Blue Jays by the final score of 7-1 on Friday night, which means the Angels have won the first two games of the series. The Angels and Blue Jays went to extra-innings on Thursday night, but the victory for the Halos on Friday was a lot easier as this one was not close from the start. The Angels scored four runs in the second inning and added two home runs in the fifth inning to mount a strong 7-0 lead by the middle of the game. The Blue Jays could only muster five hits and one single run off of a wild pitch in the bottom of the eighth. The Angels are now 6-2 and find themselves in second place in the AL West standings, while the Blue Jays are 3-5 and are in last place in the AL East.

The Los Angeles Angels are projected to bring left-hander Jose Quintana to the mound to face the Blue Jays. Quintana struggled in his first start of the season against the Astros, as he allowed four earned runs through only 3.1 innings. Quintana walked three batters, allowed five base hits, and struck out five batters in what was a no-decision start for the southpaw.

The Toronto Blue Jays are projected to send left-hander Steven Matz to the bump for game three of this series. Matz did a great job in his Blue Jays' debut against the Rangers on April 5th. Matz allowed one earned run and only two hits through 6.1 innings while striking out nine batters and only walking one. Matz will face a red hot Angels lineup that features plenty of right-handed power.

I think we see plenty of runs from both teams in this game, as the total is very steep for a reason. The Blue Jays should have no problems with Quintana and the Angels' pen, and I think this potent Angels lineup is a bad matchup for a lefty in Steven Matz. 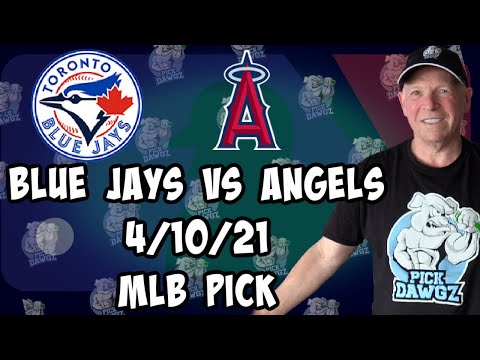