The New York Yankees will head on the road to face the Tampa Bay Rays in an AL East matchup on Friday. It will be the first of a three-game set, with both teams having Thursday off.

The Yankees are now 3-3 after losing 4-3 to Baltimore last time out. The Yankees had multiple opportunities to take the game but could not convert, highlighted by a 10th inning error by Gleyber Torres that let a run in. New York had 13 hits in the game, but were just 3-14 with runners in scoring position, stranding 12. The bullpen pitched 6.1 innings, with just 2 unearned runs allowed. To start the season the Yankees have a .254 team batting average, good for 10th in the majors. Their 1.74 team ERA is best in the league.

Starting for New York will be righty Corey Kluber. In his first start he went 5 innings, allowing 2 runs on 5 hits with 5 strikeouts. He has only faced a handful of these Rays batters in the past. Against them he has allowed a .260 batting average and 1 home run in 26 at bats.

Tampa Bay has now lost 4 in a row after their 9-2 loss to Boston on Wednesday, with Boston completing the sweep with the win. Ryan Yarborough started and was roughed up for 6 runs on 9 hits in 5 innings. From the plate they managed just 5 hits and were 2-8 with runners in scoring position. Tampa’s .208 team batting average ranks 23rd in the league, while their 5.87 ERA ranks 27th.

Veteran lefty Rich Hill will get the start for the Rays on Friday. In his first start he went 4 innings, allowing 4 runs on 5 hits. He has only faced a few Yankees in the past, but as allowed a .397 batting average in 25 at bats.

The Rays were one of the favorites to win the AL, but have not played well through the first few games. They have not been swinging the bat well, and will face a Yankees team that has been arguably the best staff in the league to this point. Rich Hill might be over the hill with a few more starts like his last one, and the Yankees should be able to capitalize on his poor start. Their .303 team batting average against left-handed pitching ranks 5th in the league on the young season. Give me the Yankees to win. 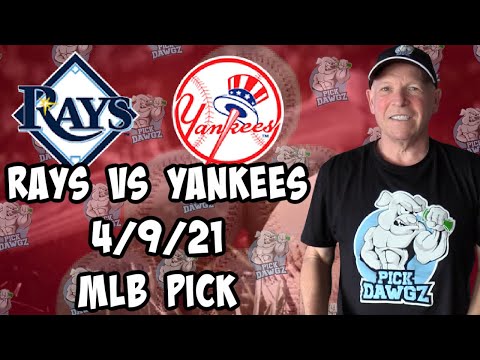