The San Francisco Giants will host the Colorado Rockies on Friday in the first of a three-game set between these NL West rivals. Colorado won the season series last year 6-4.

The Giants come into this game after taking 2of 3 on the road against the Padres. They won their last game 3-2 and allowed just 5 runs in the series.  In the last game they had 5 hits and were 2-7 with runners in scoring position. Darin Ruf homered in the second for his second of the season. To start the year, the Giants have a .201 team batting average. Donovan Solano leads the team with a .409 batting average, while Evan Longoria leads the team with 3 HR and 5 RBI. Their 3.40 team ERA ranks 9th in the majors.

Starting for the Giants will be craft righty Jonny Cueto. In his first start he went 5.2 innings with 3 runs allowed on 6 hits with 7 strikeouts. Against these Rockies he has allowed a .282 team batting average with 3 home runs in 105 at bats.

Colorado heads into this game having won 2 in a row after their 7-3 win over the Diamondbacks last time out. Starter Jon Gray took a no-hitter into the 7th and ended with 1 run on 2 hits in 6.2 innings. From the plate the Rockies had 10 hits and were 4-9 with runners in scoring position. Dom Nunez it a 3-run shot in the 6th for his 3rd of the year. To start the season, the Rockies have a .236 team batting average with 12 home runs.

Starting for the Rockies will be lefty Austin Gomber. In his first start he went 3 innings, allowing 3 runs (1 earned) on 1 hit with 7 walks. He does not have any experience against this Giants lineup.

The Giants have not hit the ball well to start the year, but have 8 home runs against left handed pitching so far. Rockies starter Austin Gomber struggled with control last time out, and could be just what a struggling Giants lineup needed. The Giants have been pitching well, and should have some extra juice playing at home for the first time this season. Give me the Giants to win. 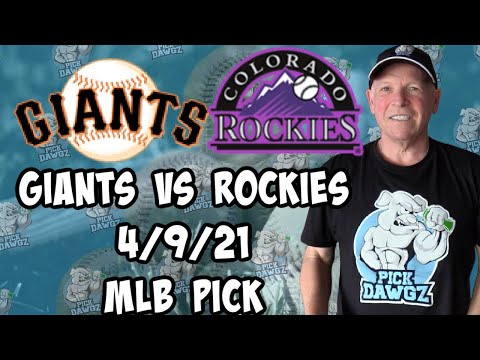