Where to Watch: BSW Stream the MLB Game of the Day all season on ESPN+. Sign up now!

The Los Angeles Angels square off Thursday night against the Toronto Blue Jays in MLB action at TD Ballpark.

The Los Angeles Angels look for a win to build on their 4-2 record. The Angels have scored 16 runs in their last three games and four or more runs in five of their six games. The Angels have won 10 of their last 13 games when scoring four or more runs. Jared Walsh leads the Angels with seven hits and seven RBI while Mike Trout and Jose Iglesias have combined for 13 hits and six RBI. Griffin Canning gets the ball, and he was 2-3 with a 3.99 ERA and 56 strikeouts last season. This will be Canning’s second career game against the Blue Jays.

The Toronto Blue Jays need a win here to get a game above a .500 record. The Blue Jays have scored 11 runs in their last three games and three or less runs in four of their six games. The Blue Jays have lost six of their last eight games when scoring three or less runs. Randal Grichuk leads the Blue Jays with eight hits and five RBI while Marcus Semien and Bo Bichette have combined for 12 hits and seven RBI. Ross Stripling gets the ball, and he is 0-1 with a 8.10 ERA and five strikeouts this season. Stripling is 1-2 with a 4.67 ERA and 16 strikeouts in his career against the Angels.

The Los Angeles Angels were able to enjoy a day off yesterday, but Canning makes his season debut on the road where he had a 4.01 ERA and .253 allowed batting average last season. The Toronto Blue Jays batting lineup has to be excited about going up against Canning and his more than hittable pitches. Ross Stripling is a better pitcher than what he showed in his debut as well. I'll take the cheap price with the Blue Jays at home. 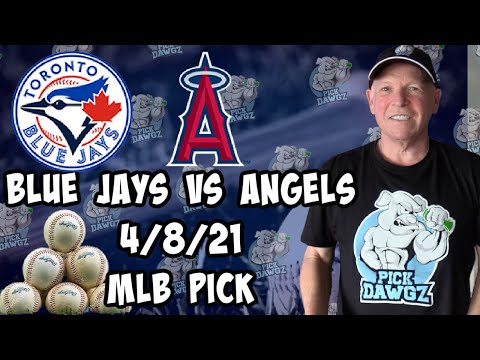