The Chicago Cubs will head on the road to face the Pittsburgh Pirates in an NL Central matchup this Thursday. Both teams are coming off losses and will look to get back on track in this one.

Chicago has now lost 2 in a row after falling 4-2 to the Milwaukee Brewers on Wednesday. Starter Kyle Hendricks tossed 6 scoreless innings, allowing just 4 hits and striking out 6. From the plate they managed just 3 hits and struck out 12 times. The Cubs were a combined 1-5 with runners in scoring position. To start the year the Cubs have a .124 team batting average, which is worst in the majors to this point. Their 3.11 team ERA is 6th in the league.

Starting for Chicago will be veteran righty Jake Arrieta. In his first start he went 6 innings allowing 1 run on 6 hits with 5 strikeouts. He has done well against this Pittsburgh lineup in the past. In 99 at bats he has allowed a combined .181 batting average with 3 home runs and 26 strikeouts.

The Pittsburgh Pirates head into this game having lost 4 in a row after their 11-4 loss on Wednesday. Chad Kuhl was given the loss in the start after giving up 5 runs (4 earned) on 2 hits with 5 walks. From the dish the Pirates were a combined 3-6 with runners in scoring position but their only runs came on a 9th inning grand slam by Erik Gonzalez. The Pirates .199 team batting average is 5th worst in the majors to this point.

Pittsburgh will start lefty Tyler Anderson on Thursday. In his first start he went 5 innings, allowing 3 runs on 5 hits in the loss. Against the Cubs lineup in his career, he has allowed a .280 batting average with 3 home runs in 65 at bats.

Both teams have been bad from the plate, but the Cubs lineup is much deeper, and has done well against Tyler Anderson in the past. Jake Arrieta was effective in his first start and should have no trouble working through this struggling Pirates lineup.  Give me the Cubs to win. 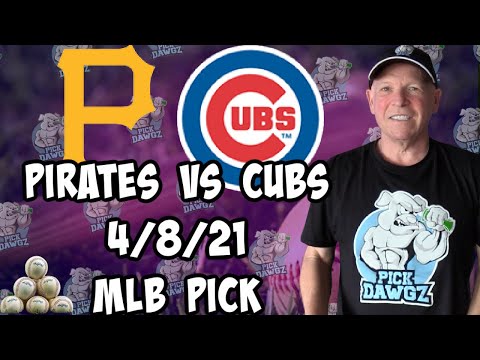