The New York Mets will face the Philadelphia Phillies in an NL East matchup on Wednesday. The Mets won 8-4 on Tuesday to even up the series.

Philadelphia’s bullpen allowed 6 runs in 3 innings in their last game, looking vulnerable for the first time this season. From the plate they had 10 hits but were just 1-11 with runners in scoring position. Dede Gregorius hit a home run in the game for his first of the year. To start the season the Phillies have a .259 team batting average, 9th best in the majors. The Phillies .168 batting average against is best in the majors through their first 5.

Starting for the Phillies will be their ace Aaron Nola. In his first start he went 6.2 innings allowing 2 runs on 6 hits with 6 strikeouts. He has a lot of experience against this Mets lineup. He has allowed a .243 batting average with 6 home runs in 171 at bats, striking out 59 of those batters.

The Mets got their first win last time out. They scored 8 runs on just 5 hits but managed to draw 8 walks.  Dominic Smith and Pete Alonso both hit 2 run shots for their first home runs of the season. The Mets are hitting a combined .224 to start the season, and are averaging 5.5 runs a game. Pete Alonso has continued hitting well after a solid spring. He leads the team with a .375 batting average, 1 HR and 2 RBI.

The Phillies should have the edge in this one. Aaron Nola will be starting and has pitched well in his career against the Mets. On the flip side the last time Peterson faced the Phillies he was pulled after just 2 innings in the loss, giving up 5 runs. Give me the Phillies to win. 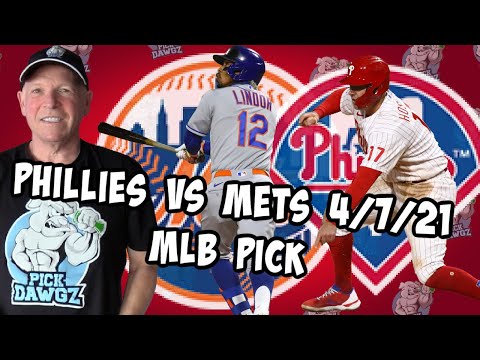