The Milwaukee Brewers face the Chicago Cubs on Wednesday, April 7th at Wrigley Field for game three of a three-game series.

The Milwaukee Brewers defeated the Chicago Cubs by the final score of 4-0 on Tuesday night. The Cubs won the first game of the series 5-3, but the Brew Crew was able to rebound and tie up the series. The Brewers scored their four runs on solely the long ball. Travis Shaw hit a three-run home run in the first inning and Omar Narvaez added a solo shot in the 4th to aid the Brewers offensively. The Brewers were led by a strong start by Freddy Peralta, who threw 5.0 innings of shutout ball while striking out eight batters. Peralta and the Brewers allowed only one hit to the Cubs in the win, as it was the team's best pitching showcase of the season.

The Milwaukee Brewers are projected to bring right-hander Brandon Woodruff to the mound to face the Cubs. Woodruff allowed three earned runs on six hits with two walks in 4.0 innings against the Twins in his first start of the season. Woodruff struggled a bit, but he was able to earn five strikeouts in what was a no-decision for the right-hander.

The Chicago Cubs are projected to send right-hander Kyle Hendricks to the bump for the final game of this series. Hendricks did not have a strong start on Opening Day against the Pirates, allowing three earned runs in only 3.0 innings of work earning the loss. Hendricks allowed four hits, a two-run home run, and three walks in the loss as well.

I am going to take the Brewers here on the road. Although Hendricks pitches well at home, I did not like the way he looked against a bad Pirates lineup at all. Woodruff has better stuff in my opinion and the Brewers have a better lineup as well. I think we have some value with Milwaukee here on the road. 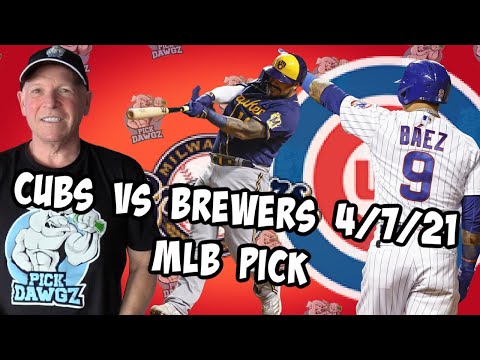