The New York Yankees will face the Baltimore Orioles in an AL East battle on Wednesday. The Yankees will be going for the sweep after their 7-2 win on Tuesday.

New York had another big day from the plate with 11 hits in their win on Tuesday. Jay Bruce hit a solo shot for his first home run, while Aaron Judge hit a 2 run shot for his 2nd of the year. Gerrit Cole pitched a gem, tossing 7 shutout innings, allowing 4 hits with no walks and 13 strikeouts. To start the year the Yankees have a 1.76 team ERA, best in the majors. From the dish they have a .241 team batting average and 6 home runs.

Baltimore is now 3-2 on the season after their loss on Tuesday. They had 7 hits in the game but were 0-4 with runners in scoring position and struck out 14 times. Starter Dean Kramer went just 3 innings, allowing 3 runs on 5 hits with 5 strikeouts. To start the year the Orioles have a .254 team batting average with 1 home run and 20 runs scored.

Starting for the Orioles will be lefty John Means. He got the win in his first start after tossing 7 scoreless innings of one-hit ball with 5 strikeouts and no walks. He has a lot of experience against the Yankees current lineup. In those matchups he has allowed a collective .224 batting average with 4 home runs in 63 at-bats.

The Yankees seem to be getting going from the plate with 4 home runs in their last 2 games. They have seen a lot of Means and done well in those opportunities. The Orioles have not been scoring a lot of runs and they have the fewest home runs in the league. Taillon has not pitched since 2019 but he had a solid spring. New York also has the luxury of a deep bullpen that whose 0.48 ERA that is best in the majors. Give me the Yankees to win. 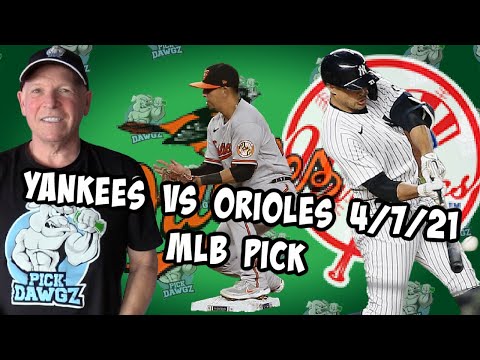