The Atlanta Braves face the Washington Nationals on Wednesday, April 7th at Nationals Park for game one of a doubleheader.

The Braves and Nationals will have to play a doubleheader on Wednesday due to Washington's COVID-19 issues at the beginning of the season cancelling the team's first few games. The Washington Nationals defeated the Atlanta Braves by the final score of 6-5 on Tuesday afternoon to win game one of the series. The Braves hit Max Scherzer hard, hitting four solo home runs in the early stages of the game. Those homers were by Ronald Acuna Jr (2), Freddie Freeman, and Dansby Swanson. The Nationals were not intimidated by the early deficit, battling their way back each time. With a tied 5-5 score in the bottom of the ninth, Juan Soto delivered the game-winning RBI single for Washington to give the Nats their first win of the season. The Braves are now 0-4 to start the year, which not many people saw coming from the defending NL East champs.

The Atlanta Braves are projected to bring right-hander Huascar Ynoa (subject to change) to the mound for game one of the doubleheader. Ynoa has already seen game action in 2021, tossing a shutout inning while allowing a hit. Ynoa pitched in 9 games in 2020, posting a 5.82 ERA with 17 strikeouts in 21.2 innings for Atlanta.

The Washington Nationals are projected to send right-hander Erick Fedde to the bump for game one of the doubleheader. Fedde had a 2-4 record with a 4.29 ERA in 11 games in 2020 for the Nationals. Fedde is entering his fifth season in the MLB, all of which have been with the Nationals. Fedde struggled in spring training, posting a 5.19 ERA in 8.2 innings.

The money line prices for this game have not yet been released, so be sure to check back soon for updates regarding the odds. Both pitchers are worrisome for me, and with the way these teams hit the long-ball on Tuesday, there is no reason for me to not take the over.

UPDATE: ESPN has changed the Braves' projected starter in game one to Max Fried, which changes things completely. With Fried on the mound, I like the Braves to earn their first win of the season for once and for all. 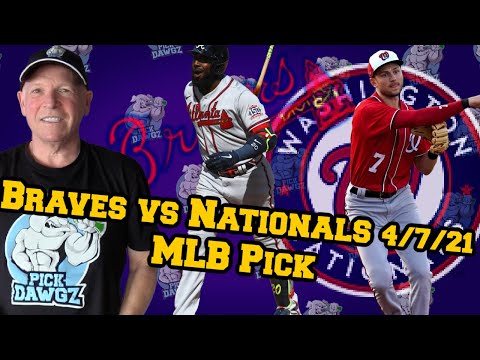