The Toronto Blue Jays will face the Texas Rangers Tuesday night in the second of their three game set. The Blue Jays took the first game 6-2.

The Toronto Blue Jays will look to keep things rolling after their win on Monday. Starter Steven Matz got the win, going 6.1 innings with 1 run allowed an 9 strikeouts. Marcus Semien hit a two run home run for his second of the season. Cavan Biggio also went yard for his first home run of the year. They were a combined 3-11 with runners in scoring position. So far the Blue Jays have a .211 team batting average with 6 home runs through their first 4 games.

The Texas Rangers lost their first game at home on Monday, and they are now 1-3 to start the season. Mike Foltynewicz got the loss in the start after going 4.0 innings allowing 4 runs on 4 hits with 3 walks. It was a rough day at the plate for the Rangers. They only mustered 5 hits and struck out 14 times in the game. They went 2-6 with runners in scoring position. To start the year the Rangers have a .248 team batting average with 3 home runs.

Texas will send out righty Dane Dunning to face the Blue Jays on Tuesday. He finished 2020 with a 2-0 record, 3.97 ERA, 1.12 WHIP and 35 strikeouts. During spring training he pitched a total of 8.1 innings with 2 runs allowed on 2 home runs with 5 strikeouts.

The Blue Jays are 7-3 in their last ten regular season games. The over has cashed in 7 of their last 10 games.

The Blue Jays have gotten off to a great start after taking the series against at the Yankees to start the year and taking the first in this one. They have not scored a ton of runs but their 2.5 team ERA is 7th best in the bigs to this point. The Rangers on the other hand are allowing a .307 batting average to the opposition, with an 8.74 ERA. Their Tuesday night starter Dane Dunning was hit hard in limited action during spring training and will face a Blue Jays lineup that has 6 home runs against right handed pitching this season. Give me the Blue Jays to win. 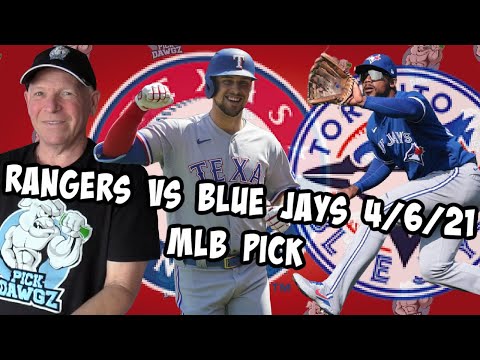