Where to Watch: BS St Louis Stream the MLB Game of the Day all season on ESPN+. Sign up now!

The St. Louis Cardinals and Miami Marlins face off on Tuesday in  a National League MLB showdown at Marlins Park.

These two teams faced off on Monday and it was the Cardinals that were able to come away with the 4-1 victory. The Cardinals scored three runs in the 1st quarter and they never looked back as they cruised to the victory.

The Cardinals moved to 2-2 with their victory on Monday. During the two losses, the Cardinals pitching staff really struggled so they had to feel good giving up only one run. Dylon Carlson and Yodier Molina have been the best players so far this season for the Cardinals with each guy driving in four RBI’s.

ON the other side of this matchup is the Marlins who have lost three of their first four games so far this season. In the three losses, the Marlins have scored only five runs total and they need to find a way to get the offense going. Right fielder Garrett Cooper has been the best player for Marlins hitting a home run and driving in three RBI’s.

On the mound for the Cardinals will be John Gant who was strong during the 2020 season finishing with a 2.40 ERA in his 17 appearances. At times, Gant didn’t get a ton of run support and that led to his 0-3 record overall.

On the mound for the Marlins will be Sandy Alcantara who has already made one appearance this season. Against the Rays on April 1st, he went six innings giving up two hits and zero runs.

Alcantara looked good in his first start and that will be the case again in this one. The Cardinals' lack of scoring is going to let them down and that will lead to the Marlins coming away with a win. 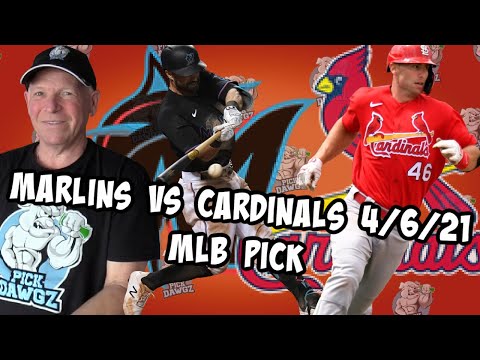