The New York Mets and Philadelphia Phillies face off on Tuesday in a National League East showdown at Citizens Bank Pak.

These two teams faced off on Monday and it was the Phillies that were able to come away with the 5-3 victory. The PHillies scored five runs in the 8th inning and that was the difference as the home team came away with the victory.

The Mets had their first series of the season canceled because of CoVID issues with the Nationals and they can’t feel good with what happened on Monday. On offense the Mets were actually led by Jacob deGrom who had two hits and one RBI driven in.

The Phillies have had a perfect start to their season winning each of their first four games. The pitching staff has been strong this year and during the four games they have given up only six runs total. On offense it’s been a balanced attack with no player having more than two RBI’s. Andrew Knapp has been the only player who has hit a home run for the Phillies.

Marcus Stroman will get the start for the Mets and this will be his first start since the 2019 season. During the 2019 season with the Mets he played in 11 games finishing with a 4-2 record and an ERA of 3.77.

Chase Anderson had issues last season and there is no reason to believe it’s going to be any different in this game. Look for Stroman to lock down, and that will be the difference as the Mets win on the money line. 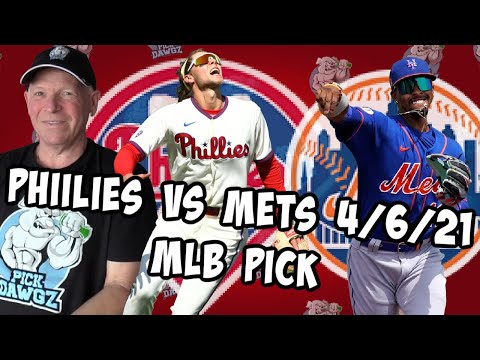