The Milwaukee Brewers face the Chicago Cubs on Tuesday, April 6th at Wrigley Field for game two of a three-game series.

The Chicago Cubs took down the Milwaukee Brewers by the final score of 5-3 on Monday night at Wrigley. The Cubs jumped out to a 4-0 lead in the bottom of the fourth inning on three home runs. A two-run shot by Wilson Contreras and two solo homers by Javier Baez and David Bote paved the way to the sizable lead. The Brewers managed to make it interesting with a three-run shot by Omar Narvaez in the 7th inning, but the Cubs went on to add an insurance run in the bottom half to make it 5-3. The Cubs are now 3-1 on the year after beating the Pirates twice in a three-game series, while the Brewers are 1-3 after losing two of three to the Twins as well.

The Milwaukee Brewers are projected to bring right-hander Freddy Peralta to the mound to face the Cubs. Peralta will more than likely be in the opener role in this game, as he has already been featured in two innings this season. In those two innings, Peralta allowed two hits and three walks while striking out six batters and not allowing a single run. Peralta's strikeout rate is dazzling but his control can be a problem.

The Chicago Cubs are projected to send right-handed prospect, Adbert Alzolay to the bump for game two of this series. Alzolay had a 1-1 record with a 2.95 ERA in the six games he pitched in with the Cubs in 2020. Alzolay also has a fantastic strikeout rate but walks are also a problem for the 24-year-old Venezuelan. Alzolay will make his season debut in this spot for Chicago.

The Cubs are yet again small favorites in this game just as they were in game one of the series. I am intrigued to see the total for this game, as I think both pitchers have the potential to miss a lot of bats in this game. I like Alzolay and the Cubs' lineup a tad more at the moment, so I will lean Chicago's way in game two. 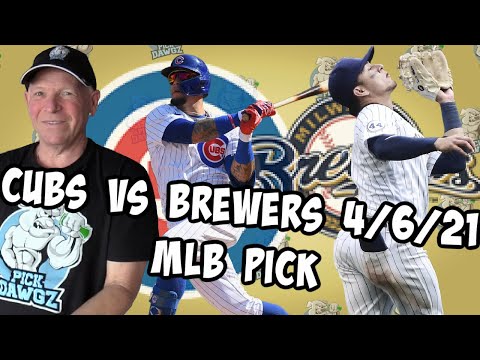