The Baltimore Orioles and New York Yankees face off on Tuesday in an American League East MLB showdown at Yankee Stadium.

The Orioles and Yankees faced off on Tuesday and it was the home team that was able to come away with the 7-0 victory.

The Orioles had won their first three games of the season over the Red Sox before losing on Monday. During the three game winning streak the Orioles gave up only five points total, and they need the pitching staff to get back on the right track. The Orioles have been led by Maikel Franco and he has four RBI’s.

On the other side of this matchup is the Yankees who lost two of their three games against the Blue Jays before beating the Orioles on Monday. Ginacarlo Stanton had a big game hitting a home run and that helped pace the Yankees. On the season Gary Sanchez has hit two home runs and and Aaron Judge has added another one.

Dean Kremer will get the start for the Orioles who hasn’t had a whole lot of MLB experience. Back in September of 2020 is when Kremer made his major league debut.

Gerrit Cole will get the start for the Yankees and he has made one start already this season against hte Blue Jays and he went 5.1 innings giving up five hits and two runs.

Cole is going to be lights out again and the Yankees will win this game in blowout fashion. Back them -1.5 and if your book offers it, take them -2.5 IN terms of the total it's a lean to the under because of the lack of scoring by the Orioles. 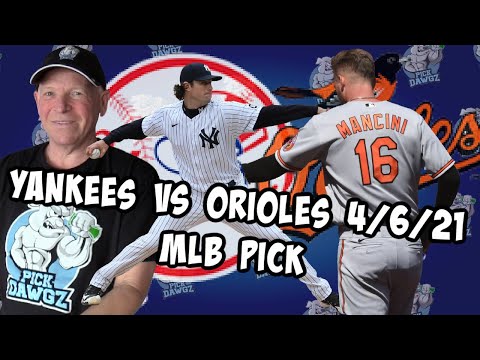