The Arizona Diamondbacks face the Colorado Rockies on Tuesday, April 6th at Coors Field for game one of a three-game series.

The Diamondbacks and Rockies were both given the day off on Monday after completing four-game series' against the Padres and Dodgers respectively.

The Arizona Diamondbacks are projected to bring right-hander Luke Weaver to the mound to face the Rockies. Weaver is coming off the worst season of his career, posting a 1-9 record (his nine losses led the league) with a 6.58 ERA and a 1.7 HR/9. The Diamondbacks will need Weaver to bounce back this season and would love to see similar results from his 2019 year when he had a 2.94 ERA.

The Colorado Rockies are projected to send out their ace in German Marquez to the bump for the first game of this series. Despite only being in their fifth game of the season, the Rockies will send out Marquez yet again after he started on Opening Day. Marquez pitched 4.0 innings of one-run ball with six walks, six hits, and only two strikeouts. Despite not allowing more than a run, Marquez was not sharp at all in his first start of the season. The walks will have to go down if Marquez has any success this season.

This is a low total for a Coors Field game and I am not too sure why. Weaver had an awful spring and Marquez looked dangerous in a negative way on Opening Day. I can only see this game being a typical Coors Field shootout between two bad pitching teams. I will take the over. 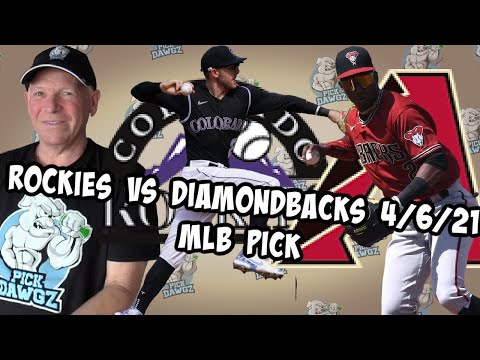