The St. Louis Cardinals will head on the road to face the Miami Marlins on Monday night. Both teams are 1-2 to start the season.

St. Louis has now lost 2 straight after falling 12-1 in Cincinnati on Sunday. The offense fell flat, going 1-7 with runners in scoring position, and had just 5 hits in the game. Tyler O'Neil scored the teams only run. Starter Carlos Martinez went 5 innings, giving up 4 runs. The bullpen continued to struggle, allowing 8 runs in 4 innings. So far this season the Cardinals bullpen has a collective 7.62 ERA and a 1.62 WHIP. From the plate Paul Goldschmidt leads the team with a .385 batting average and .429 OBP.

Miami exploded for 12 runs last time out, beating Tampa Bay 12-7 for their first win. Starling Marte had 4 hits, and Garrett Cooper had a HR and 3 RBI. As a team they had 14 hits and were 5-16 with runners in scoring position. The bullpen had to go 6.2 innings after starter Elieser Hernandez was pulled in the third inning. So far this season the Marlins have a collective .267 batting average and a league high 6 stolen bases. The Marlins will start Trevor Rogers on Monday. In 2020 he was 1-2 with a 6.11 ERA, 1.61 WHIP and 39 strikeouts. During spring training he was 3-0 with a 2.84 ERA, 0.95 WHIP and 29 strikeouts.

St. Louis has not been pitching well to start the year. They have now given up 32 runs in their first three games, and their 6 home runs allowed are the second most in the league. The bullpen has been put to work, and they have struggled mightily. On the flip side Miami's second year lefty was great during spring training, and the Cardinals are just 2-11 against left-handed pitching this season. St. Louis is going to have a tough time from the plate, and with the way they have been pitching I will fade them here. Give me Miami to win. 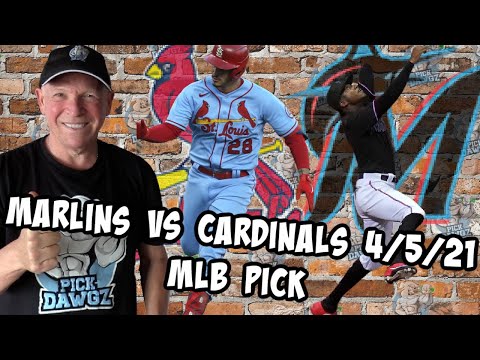