The San Francisco Giants and San Diego Padres face off on Monday in a National League West showdown at Petco Park.

The San Francisco Giants opened up their season against the Seattle Mariners and they were able to win only one of the games. The offense was strong in the first two games, but on Sunday they couldn’t get anything going scoring zero runs. Overall the pitching staff gave up 15 runs in the three games. Evan Longoria has been the best player for the Giants so far this season hitting two home runs and driving in four RBI;s.

On the other side of this matchup is the Padres who won their first three games of the year against the D-Backs before losing on Sunday.In the last three games for the Padres the pitching was strong giving up only five runs total. Eric Hosmer has been the best player for the Padres hitting two home runs and driving in six RBI’s.Fernando Tatis Jr defense was suspect in the first season and they need him to be better.

Anthony DeSclafani will get the start for the Giants and last year with the Reds he finished with a 1-2 record overall and an ER of 7.22.

Picking your spots with the Giants as an underdog might be tricky this season, but this is a perfect spot for it. Look for the Giants to be strong with their offense and that will be enough to come away with a victory. 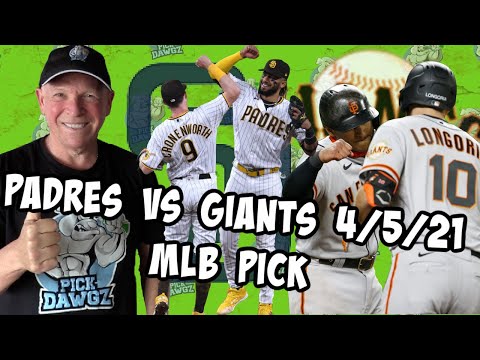