The Chicago White Sox Will stay on the road to face the Seattle Mariners on Monday night. The two teams did not face each-other during a shortened 2020 season.

The Seattle Mariners won on Sunday 4-0 thanks to some fantastic pitching. They struck out 12 batters and only gave up 6 hits. The Mariners got some timely hitting to make the most of limited opportunities, going 3-10 with runners in scoring position. Mitch Haniger and Ty France both went yard for the first time this year. To start the season the Mariners have a .202 team batting average. Mitch Haniger leads the team with a .308 batting average and 1 home run.

The White Sox lost 7-4 to the Angels on Sunday, falling to 1-3 on the year. Star shortstop Tim Anderson left in the first inning with a hamstring injury. The White Sox were a combined 0-11 with runners in scoring position against the Angels, stranding 10 runners in the game. So far this year the White Sox are batting a collective .241 from the plate. Luis Robert leads the team with a .313 batting average.

The White Sox were hit by the injury bug again. They lost their leadoff hitter Anderson on Sunday and he is now listed as day to day. The team is already missing their top bat Eloy Jimenez for the next 60 days. Despite that I still give them the edge here. The Mariners are not hitting the ball well to start the year, and are a combined 0-12 from the plate against lefties to start the season. On the flip side Mariner's starter Justus Sheffield was not good during spring training, and the current White Sox roster has a collective .367 batting average against him. Give me the White Sox to win. 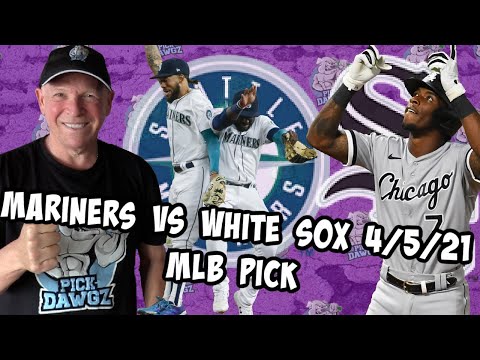