The New York Yankees will host the Baltimore Orioles on Monday in the first of a three game set. Last season the Yankees won the season series 7-3.

The Orioles head into this game fresh off a three game sweep in Boston. The offense broke out on Sunday, and they cruised to an 11-3 victory. They were 8-24 with runners in scoring position, and every batter reached base in the game. The bullpen pitched 3 scoreless innings in relief, and have yet to give up a run this season.

The Yankees will look to get back on track after dropping 2 of 3 at home against Toronto to start the season. They continued to struggle at the plate on Sunday, with just 5 hits in the 3-1 loss. Clint Frazier was the only Yankee to score in the game. They were a combined 0-5 with runners in scoring position. Starter Domingo German was chased out in the 3rd after giving up 3 runs on 4 hits, with 2 home runs allowed. So far this season the Yankees offense has a .218 batting average and just 8 runs scored.

New York will send out lefty Jordan Montgomery against the Orioles. In 2020 he was 2-3 with a 5.11 ERA, 1.30 WHIP, and 47 strikeouts. In his career Montgomery has been solid against the current Orioles lineup. He's held them to a .226 batting average, while striking out 11 in 28 at bats.

The Yankees offense has not been clutch, hitting a collective .167 with runners in scoring position. They have managed to get on base despite the poor hitting, with a .313 OBP. Lopez has given up a home run in his last 4 starts dating back to 2020. The Yankees were able to score 3 in five innings when they faced him in 2020, so he could be just what this offense needed. With Montgomery's success against the Orioles, New York should have the edge on the mound. Give me the Yankees to win. 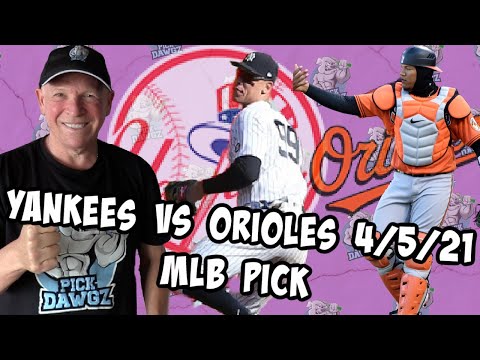