Where to Watch: SportsTime LA Stream the MLB Game of the Day all season on ESPN+. Sign up now!

The Los Angeles Dodgers and Colorado Rockies face off on Sunday in an NL West MLB showdown at Coors Field.

The Rockies won the first game of this series, but the Dodgers have bounced back in two straight games to come away with victories. Two of the three games in this series have gone over the total and the other stayed under by only a run.

The Rockies offense has been fine so far this season, but at Coors Field they know sometimes their pitching is going to let them down and that has hurt them.The good news for the Rockies is they have gotten production up and down the lineup. On Saturday the best player was Josh Fuentes who drive in two runs.

For the Dodgers they have a talented lineup and down and it shouldn’t be shocking their offense has found so much success.Much like the Rockies, this is a team that has gotten production up and down the lineup. Catcher Austin Barnes was the best player on Saturday driving in two runs.

On the mound for the Rockies will be Austin Gomber who spent last season with the Cardinals and he finished with a 1-1 record and an ERA of 1.88.

This is at Coors Field, but this total is too high. I expect to see a bit of a pitcher's duel and this game is going to stay under the total. Back the under. 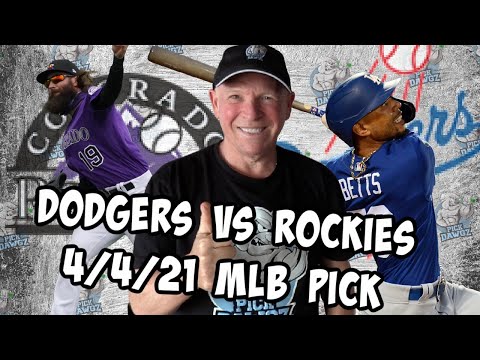