The Atlanta Braves face the Philadelphia Phillies on Sunday, April 4th at Citizens Bank Park for game three of a three-game series.

The Philadelphia Phillies, but more specifically Zack Wheeler, dominated the Atlanta Braves on Saturday afternoon in a 4-0 win. Not only did Wheeler and the Phillies only surrender one hit in the win, but Wheeler also got it done at the dish getting two RBI's. The Phillies have now won the first two games of this series and of the season thus far. The Braves' offense has struggled in its first two games of the season, only scoring two runs in the first two games combined. As a team, the Braves have a .189 batting average, which was not what the expectation was heading into this series.

The Atlanta Braves are projected to bring the youngster Ian Anderson to the mound to face the Phillies. Anderson went 3-2 with a 1.95 ERA in six games with the Braves in 2020. Anderson finished 7th in rookie of the year voting, despite only playing in six regular season games for Atlanta. Anderson struggled in spring training but will look to be a major part of this talented Braves rotation.

The Philadelphia Phillies are projected to send right-hander Zach Eflin to the bump for game three of this series. Eflin went 4-2 with a 3.97 ERA in 11 games with the Phils in 2020. Eflin has been a mid-level starter for the Phillies for the five years he has been in the MLB. Eflin does not have fantastic stuff, but he is a solid starter that does not allow the long ball or walks too many batters.

I like the Braves to finally get their first win of the season and salvage the third game of this series. Eflin had a great spring but I still think Anderson is the better pitcher here and the Braves' bats should be rolling after two disappointing performances. 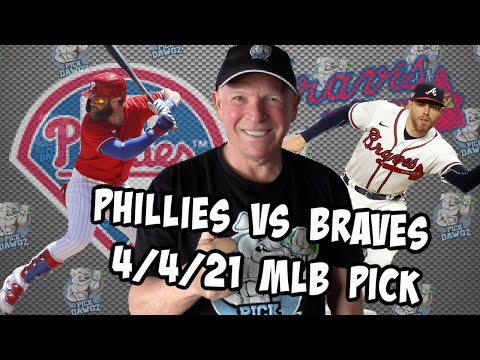