The Seattle Mariners will face the San Francisco Giants on Saturday in the rubber game of their season opening series.

The Giants came away with a 6-3 victory Friday night for their first win of the season. Buster Posey and Evan Longoria each homered for the second consecutive game. The Giants were 2-4 with runners in scoring position. Starter Johnny Cueto went 5.2 innings allowing 3 runs, 6 hits and striking out 7. The bullpen pitched 3.1 scoreless innings, striking out 5.

The Giants are expected to send righty Logan Webb to the mound Saturday night. In 2020 he was 3-4 with a 5.47 ERA, 1.56 WHIP and 46 strikeouts. In spring training he was 2-0 with a 0.53 ERA, 0.53 WHIP and 22 strikeouts. Last time he pitched against Seattle was back in September. He pitched 5 innings, giving up 5 runs, 6 hits and striking out 4.The Seattle Mariners gave up two runs in the 6th and 3 in the 7th to relinquish the lead in Fridays loss. The Mariners were held scoreless in the last 6 innings of the game. They were 2-6 with runners in scoring position, leaving 5 stranded on base. Reliever Drew Steckenrider was credited with the loss after giving up 3 runs in 0.2 innings pitched.

The Mariners will call upon converted reliever Chris Flexen to start on Saturday. He has not pitched in the regular season since 2019 when he was playing for the Mets. That season he had a 6.59 ERA, 2.05 WHIP and 10 strikeouts in 13.2 innings pitched. During spring training he was 1-1 with a 5.06 ERA, 1.38 WHIP and 17 strikeouts.

Both teams will be sending out righties in this matchup. Last season the Mariners were ranked 22nd in the league with a .708 OPS against right-handed pitching. The Giants were ranked 11th with a .764 OPS.

There are concerns with both starters as Chris Flexen has not started a game since 2019 and the Giants starter Logan Webb was touched up the last time he faced the Mariners. The jury is out on both of these bullpens as they have each shown cracks in this series. At the plate Posey and Longoria have both gotten off to a hot start for the Giants, so look for them to keep it going in this one. On the other hand the Mariners are rebuilding with a young team who does not produce a lot of power, ranking 25th in home runs in 2020. In a game where there will likely be a lot of runs scored, I will take the veteran lineup that is off to a hot start. Give me the Giants to win. 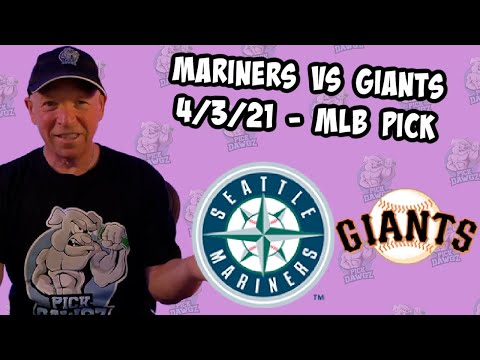