The Oakland Athletics will host the Houston Astros this Saturday. They are looking to avoid being swept after dropping the first two in this season opening series.

The Houston Astros could not have asked for a better start after taking two on the road against a good A's team. The Astros bats were out in full force Friday. Alex Bregman homered for the second straight game. Yuli Gurriel was 3-3 with two walks, a run and an RBI. Michael Brantley was 3-5 with 3 doubles and 2 runs scored. Only two Astros failed to get a hit in the game. Cristian Javier started but went just 3.2 allowing 2 runs and striking out 2. As a team the Astros are batting .273 with a .395 OBP to start the season.

Houston will start Lance McCullers Jr in the series finale Saturday. Last season he was 3-3 with a 3.93 ERA and 56 strikeouts. The last time he faced the A's was in Oakland last October. The Astros won the game but McCullers only went 4 innings and was taken deep 3 times.

The Oakland Athletics will look to bounce back after another loss Friday. They rallied late pull within 1 run, but that was as close as they got before giving up three in the 9th, ending in a 9-5 defeat. The A's were 0-6 with runners in scoring position, and stranded 7 runners in the game. Chad Pinder had a two run home run for his first four-bagger of the year. Starter Jesus Luzardo went 5 innings, giving up 5 runs, 8 hits and 2 home runs. The bullpen was equally inefficient, giving up 4 runs in 4 innings.

Houston has hit the ball well to start the year, scoring 17 runs in their first two games. Look for that pace to slow down a bit in this one. Last season the Astros struggled against left-handed pitching, hitting just .232 with a .298 OBP. Cole Irvin had an impressive spring, including a win against the Dodgers which saw him mow down the core of their opening day lineup. McCullers was knocked around the last time he faced Oakland, so I like their chances of getting back on track in this one. Give me the A's to win. 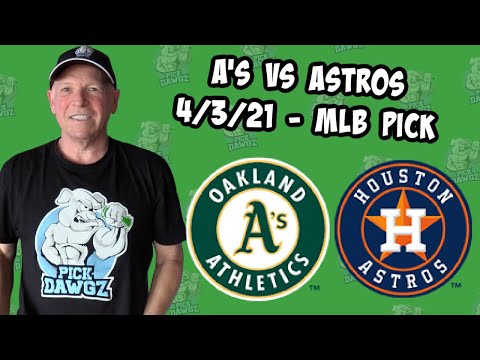