The Philadelphia Phillies will host the Atlanta Braves in the second game of their opening week series this Saturday. Philly took the first game 3-2 on a Jean Segura walk-off single.

The Atlanta Braves will look for redemption after falling in the first matchup. The Braves offense was only 1-8 with runners in scoring position, and left 9 men on base. The only scoring came on a 7th inning pinch hit home run by Pablo Sandoval to tie the game at 2. Ronald Acuna Jr. had a solid game at the plate, going 2-4 with a walk. Starter Max Fried went 5 innings, tossing 8 strikeouts and allowing 2 runs on 6 hits. The bullpen went 4 2/3, allowing the lone run in the tenth to end it.

Atlanta will call on crafty veteran Charlie Morton to start against the Phillies. In 2020 he was 2-2 with a 4.74 ERA, 1.39 WHIP, and 42 strikeouts. During spring training he pitched a total of 10.1 scoreless innings in three starts, striking out 9 with a WHIP of 1.16.

The Philadelphia Phillies will try to ride the momentum from their extra innings victory on opening day. They managed to defeat the Braves when Max Fried was starting, something they failed to do in two games last season. Aaron Nola went 6.2 innings, allowing 2 runs on 6 hits and striking out 6. The bullpen pitched 3.1 innings of one hit ball, only allowing 1 hit. J.T. Realmuto went 2-4 with an RBI. Jean Segura went 2-5 with the game winning RBI. As a team the Phillies were 3-14 with runners in scoring position, and left 12 on base.

I will stay with the Phillies in this one. Outside of their pitcher, all but one starter had at least one hit against a great Braves pitching staff in their first game. This is an offense that is as good as any when everyone is healthy, which is the case right now. The Braves have not been consistently scoring many runs dating back to last season, and until they get that straightened out it will be hard to back them when Fried is not on the mound. Give me the Phillies to win. 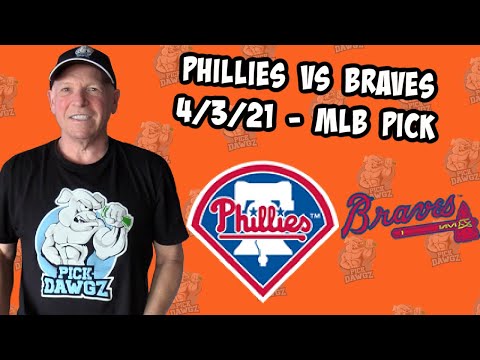