The Los Angeles Dodgers face the Colorado Rockies on Friday, April 2nd at Coors Field for game two of this four-game series.

MLB Opening Day was filled with some major upsets and the Dodgers were one of the teams that fell victim to that. The Colorado Rockies defeated the Los Angeles Dodgers by the final score of 8-5 on Thursday afternoon in Colorado. The Dodgers struck first on a Cody Bellinger RBI single, but LA did not see a lead for the rest of the game as the Rockies were quick to take control. Neither team hit a home run in the game, which is a rare sight to see in an 8-5 offensive shootout at Coors Field. Chris Owings went 3-3 with a walk, 3 runs scored, and one RBI for the Rockies in the win. Chi Chi Gonzales earned the win for the Rockies, while the left-hander Clayton Kershaw suffered the loss for the Dodgers. Daniel Bard earned his first save of the season as well for the Rockies.

In game two, the Dodgers are set to bring their most anticipated pitching acquisition in right-hander Trevor Bauer to the mound. What can be said about Bauer other than he was the NL Cy Young Award winner in 2020, had a 5-4 record with a 1.73 ERA, and led the NL in complete games, shutouts, WHIP, and H/9 as well. Bauer signed with Los Angeles in the offseason and will make his Dodgers debut on Friday night.

The Colorado Rockies are projected to send right-hander Antonio Senzatela to the bump to face the Dodgers in game two. Senzatela was solid for the Rockies in 2020, earning a 5-3 record with a 3.44 ERA. Senzatela does not strike out too many batters, which can be a worry when you pitch in a hitter-friendly ballpark like Coors Field. However, Senzatela was better at home than he was on the road, as he had a perfect 3-0 record with a 2.10 ERA at Coors in 2020. 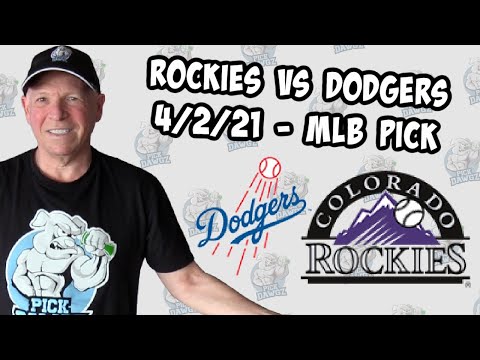