Where to Watch: ROOT Stream the MLB Game of the Day all season on ESPN+. Sign up now!

The Houston Astros and Oakland Athletics face off on Thursday in an MLB opening day showdown at RingCentral Coliseum.

The Houston Astros 2021 team looks a lot different including with the team not having George Springer who has moved on to the Toronto Blue Jays. Even though this Astros team looks different, it’s still a talented squad led by Jose Altuve who will be making his 10th opening day start with the team. Last season in the shortened season, Altuve only had a .219 batting average and they are going to need to have a whole lot more production from him. Carlos Correa is also going to need to have a big game. This is a team that also might not to do a better job of manufacturing runs instead of leaning on the long ball.

On the other side of this matchup is the Oakland Athletics who had a nice season in 2020 and the expectation is going to be they are going to need to be good.The star of this team is Matt Chapman who finished last year only hitting .232 and he finished with 33 hits and 22 runs If the A’s want to have success and win the American League West, they are going to need to have success against the Astros.

Zack Greinke will get the start for the Astrons and last season he finished the year with a 3-3 record overall and an ERA of 4.03.

Getting the start for the A’s will be Chris Bassitt who finished with a 5-2 record overall and an ERA of 2.20.

Bassitt looked strong last season and he is going to have no issue getting the job done in this game. Look for the Astros offense to struggle in this game, and the A’s will cash. 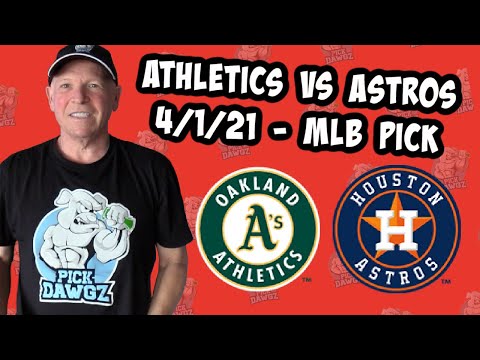