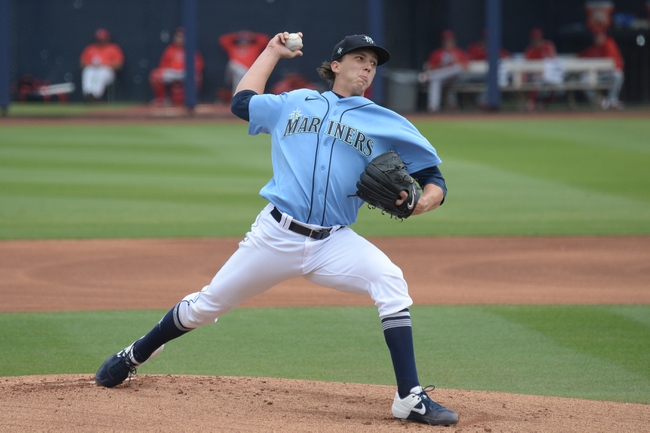 A Look at the Mariners for the 2020 MLB Season

The Seattle Mariners are trying to rebound from a rough 2019 campaign.  The Mariners finished last in the AL West, with a record of 68-94. Let us take a look and see who the Mariners will have in their lineup, as well as on their pitching staff. Get MLB Predictions and MLB Picks for every Mariners game at Pick Dawgz.

The Mariners will be looking for leadership out of Kyle Seager, Mallex Smith, and Daniel Vogelbach.  Seager will be entering his 10th season, as the 3rd baseman finished with a .239 average, while smacking 23 home runs and knocking in 63 rbis.  Smith didn’t have a great year average wise, finishing with just a .227 average, but he did swipe 46 bases. Smith also added 37 rbis and 19 doubles in 134 games.  Vogelbach who manned the designated hitter spot had a rough year contact wise. Vogelbach hit just .208 on the season, but showed great pop. The designated hitter slugged 30 home runs and finished with 76 rbis.

The Mariners will have the likes of Marco Gonzales, Taijuan Walker, and Yusei Kikuchi in the rotation for the 2020 season.  Gonzales was no doubt the leader on this struggling staff from a year ago. The left hander recorded a record of 16-13, while posting a 3.99 era.  Kikuchi in his rookie year, posted a 6-11 record, while finishing the 2019 campaign with a 5.46 era. Walker returns to Seattle after 3 years in Arizona.  Walker had just 4 appearances in the last 2 seasons.

The Seattle pitching staff had a poor era a year ago, finishing the season with a 4.99 era.  The Mariners will have to get better at keeping the ball in the ballpark, as 4 starters allowed 26 or more home runs, while the team gave up a total of 260 in the 2019 season.

The Mariners just don’t match up great against the rest of the AL West.  While Seattle does have a lineup that can produce power at times, the lineup is not deep enough.  Marco Gonzales should be able to hold his own as the front runner in the rotation, but the rest of the rotation will have a lot of work to do.  I just don’t see the rotation being able to hold their own outside of Gonzales, as giving up the log ball looks to be an issue. I’m going to take the under, as I don’t see Seattle being better than last season.