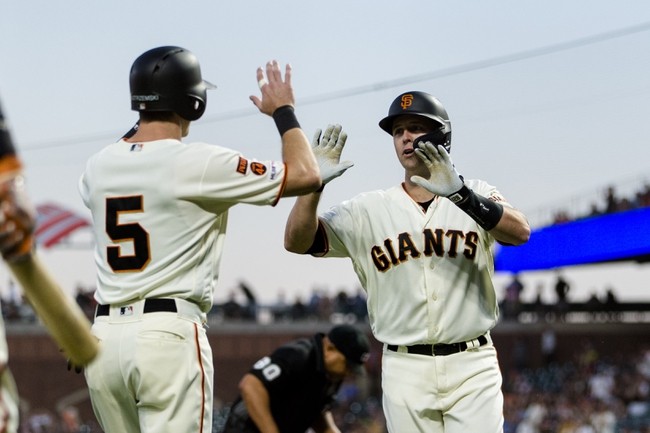 A Look at the Giants for the 2020 MLB Season

The Giants have a wealth of veterans in this lineup and some will need to rebound from a season ago.  Evan Longoria returns for San Francisco, the third baseman hit .254 while totaling 20 home runs and 69 RBIs.  Shortstop Brandon Crawford had a down year, recording a .228 average and 11 home runs with 59 RBIs in 147 games.  Longtime Giants catcher Buster Posey returns for his 12 season, coming off a 2019 season where he hit just .257 in 114 games.  Mike Yastrzemski added 22 doubles and 21 home runs while hitting .272.

The Giants as a team hit a poor .239 last season, while finishing with just 167 home runs.  San Francisco had an on base percentage of .302.

The Giants pitching rotation was hit and miss on the mound, totaling a 4.38 ERA during the 2019 campaign.  The staff posted a 1.30 WHIP last season.

The Giants will be hoping that Johnny Cueto who enters his 13h year in the big leagues will be able to have a healthy season.  Cueto was injured most of the 2019 season, starting just 4 games and posting a 1-2 record with a 5.06 ERA. Jeff Samardzija carried the staff last year, registering a 3.53 ERA and a 11-12 record.  The former Notre Dame product recorded 140 strikeouts in 181.1 innings. Kevin Gausman, Drew Smyly, and Tyler Beede are also expected to see ample time in the rotation. The Giants do have Tony Watson in the bullpen, who is a solid arm to have in the 8th and 9th innings.

The Giants have ample surplus of experience on this team.  However, this team struggled last season and the Giants return the same core players.  Alex Dickerson is expected to see more time this season in the outfield, but other than that the Giants should have the same lineup.  When you look at the rotation, the leadership comes from Cueto and Samardzija. Both are entering their 13 season in the league. Cueto is coming off an injury and this season is a question mark for him because of it.  I don’t see the Giants improving from a year ago, but I do expect the win total to be better than the projection. I’ll side with the over, but the Giants will decline from a year ago.