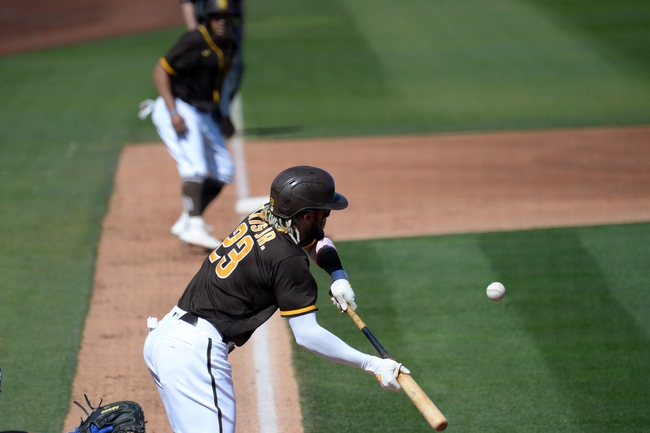 A Look at the Padres for the 2020 MLB Season

The San Diego Padres are looking to improve off a dreadful 2019 campaign, as the Padres finished just 70-92 and lost 9 of their last 10 to end the season.  The Padres should have no issue improving their record, as San Diego made some moves in the off season. Let us take a look at what the Padres will have to offer in their lineup and pitching staff. Get MLB Predictions and MLB Picks for every San Diego Padres game at Pick Dawgz.

The Padres have a real chance of having an exciting offense, which is something the San Diego fans aren’t used to seeing. First baseman Eric Hosmer enters his 3rd season with San Diego, as Hosmer has seen his average improve in the first 2 seasons with the Padres.  Hosmer hit .265 a year ago, while slugging 22 home runs and falling 1 rbi shy of 100. When you go across the diamond, Manny Machado adds power and a flashy glove defensively. Machado while having a down year average wise last season, finishing at .256, the power hitting 3rd baseman is bound for a rebound year.  However, Machado still slugged 32 home runs, while driving in 85 runs. The 3rd baseman did have the most strikeouts in his career, finishing with 128. Fernando Tatis Jr. is one of the top tier young players in the game. Tatis played 84 games for the Padres last year, while connecting on 22 long balls and driving in 53 runs, while hitting .317.  This will be Tatis first full season and the sky's the limit.

Tommy Pham was acquired in the off season from Tampa Bay and Pham will add experience and leadership that the Padres need in this lineup.  Pham hit .273, while hitting 21 home runs and hitting the gap collecting 33 doubles. Pham should be able to help bolster an already loaded lineup, that also has the likes of Wil Meyers and utility player Greg Garcia.  Meyers had a down year last year, hitting just .239, but still hit 18 home runs, while swiping 16 bags. Garcia, while not having a powerful bat, still give the Padres options, as he played 5 different positions a year ago.  Garcia who hit .248 is also a solid option to pinch hit.

The Padres have one of the younger rotations in baseball and should only get better with experience. Chris Paddock enters his 2nd season in the big leagues, finishing last year with a 9-7 record, but did have a solid era of 3.33.  Paddock struck out 153 batters in 140.2 innings. San Diego also has the likes of southpaw Joey Lucchesi. Lucchesi enters his 3rd season for the Padres after having a great college career with Southeast Missouri State. Lucchesi went 10-10 last season with 4.18 era, while striking out 158 and walking 56.  Lucchesi does need to cut down on the long ball, as he has given up 23 in each of his first two seasons.

The Padres also acquired Zach Davies who came over from Milwaukee.  Davies went 10-7 with 3.55 era last year. The Padres also have Garrett Richards and Dinelson Lamet in the rotation.  The Padres had arguably the best closer in baseball last year, Kirby Yates. Yates had a stellar 1.19 era, while converting 41 saves in 44 opportunities.  Yates had 101 strikeouts in 60.2 innings.

The Padres should be able to improve their record from last year easily.  San Diego could have one of the better lineups in baseball power wise, but keeping the strikeouts down will be the issue.  The Padres pitching staff will be led by young talent and as their experience grows, the Padres will get better as the season progresses.  If the Padres have a lead late in the game, you can expect the Padres will win the game, due to Yates being a lock down closer at the back end of the bullpen.  The Padres have a nice mixture of young talent and veterans, I’ll look for San Diego to surpass the projected win total.