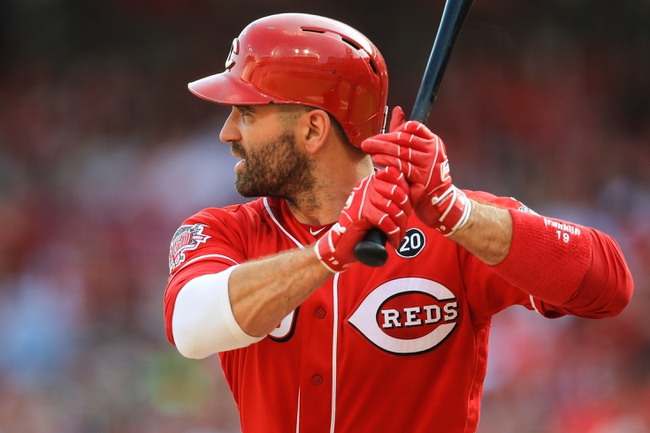 The Cincinnati Reds are looking to build off of their 2019 season.  The Reds finished 4th place in the NL Central with a record of 75-87.  Cincinnati should be better than last season, let us take a look at their lineup and pitching rotation. Get MLB Predictions and MLB Picks for every Reds game at Pick Dawgz.

The Reds will have nothing short of power in this 2020 lineup, as Cincinnati has the likes of: Joey Votto, Mike Moustakas, Eugenio Suarez, and Nicholas Castellanos.  Votto has been the staple in this lineup, hitting .261 with 15 home runs and 47 rbis a season ago. Moustakas had a nice season, smacking 35 home runs and knocking in 87 runs, while having an average of .254.  Suarez will be looking to have back to back seasons with more than 40 plus home runs. Suarez totaled 49 home runs and 103 rbis, while hitting .271. Castellanos had 27 home runs and 73 rbis between the Cubs and Tigers during the 2019 campaign.  The four players combined to hit 126 home runs last season.

The Reds' struggles last season came from their rotation, as Cincinnati had a team era of 4.18.  Cincinnati will be looking at Luis Castillo to build off a solid season a year ago. Castillo finished the season with a 3.40 era and a 15-8 record.  The right hander had 226 strikeouts in 190.2 innings. The Reds coaching staff and front office will be hoping the veteran experience of Sonny Gray and Trevor Bauer will help lower the team era from a year ago.  Gray had a nice year in his first year as a Red, finishing with a 2.87 era, while going 11-8. Bauer came over in a trade from Cleveland around the trade deadline and pitched in just 10 games with Cincinnati. Bauer struggled to a tune of 6.39 era during that stretch.  Raisel Iglesias registered 34 saves in 40 chances at the back end of the pen.

The Reds have an advantage with their lineup, considering half the games will obviously be at home.  Cincinnati has a ton of power and should be able to out slug some of their opponents, especially at home.  It would not surprise me to see the reds steal some wins even when their pitching gets shelled. Cincinnati is better than last year and other teams in the NL Central have decreased.  I like for the Reds to improve from last season and cover this win total.