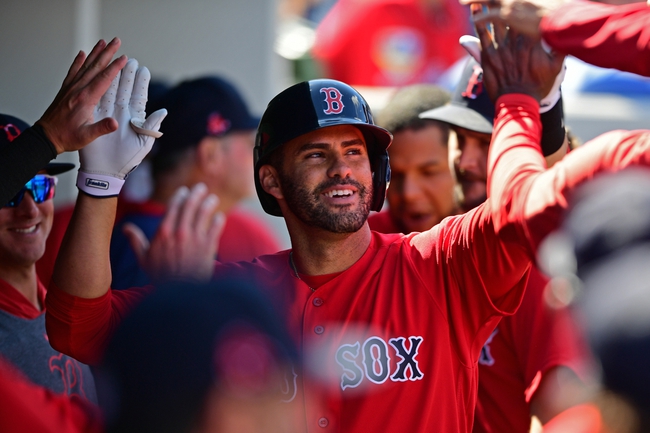 The Boston Red Sox finished the 2019 season with 84 wins and there are a lot of question marks heading into this season Gone is David Price, Mookie Betts, and Alex Cora and this seems like almost a transition year. Get MLB Predictions and MLB Picks for every Red Sox game at Pick Dawgz.

This is still a team that has a lot of talent, but they will have their hands full if they want to win the American League East.

Mookie Betts is gone and that is a lot of production the Red Sox are going to have to make up for. During the 2019 season Betts hit .295 driving in 80 runs and 29 home runs.

Last season Martinez hit .304 with the Red Sox putting up 36 home runs and 106 RBI’s. This season if the Red Sox want to win the AL East, Martinez needs to have a big season.

The Red Sox received Alex Verdugo in the trade from that Dodgers that shipped Betts out, and he is going to be another key. During the 2019 season, Verdugo hit .294 driving in 44 RBI’s.

To say the Red Sox pitching staff has some questions might be an understatement. Gone is David Price who was shipped off to the Dodgers and Chris Sale is dealing with an elbow injury. Sale has elected against Tommy John surgery, but who knows how effective he will be.

Eduardo Rodríguez is the one pitcher for the Red Sox that can probably be trusted. Rodriguez went 19-6 with an ERA of 3.81 during the 2019 season. Nathan Eovaldi, Martiz Perez, Ryan Weber, and Bryan Johnson are the others that are projected to be in the starting rotation.

Matt Barnes and Ryan Brasier are the two guys in the bullpen but after that, there are a lot of question marks. Brandon Workman is expected to be the closer after saving 16 games in 2019. If he can play as well as he did last year in a bigger role, that is a big boost to the bullpen.

Look for the Red Sox to finish right around 82 or 83 wins which is under the total.