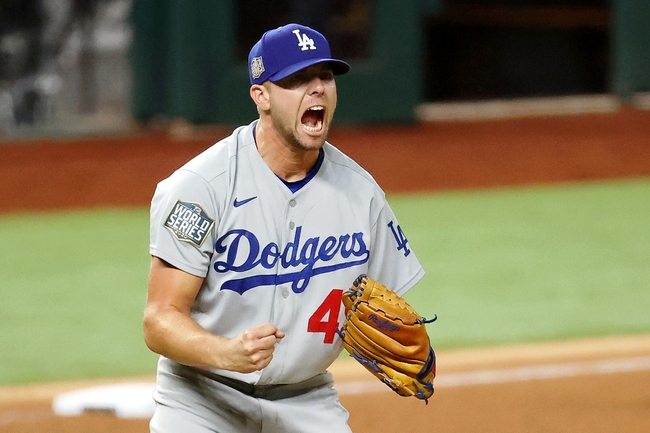 The Los Angeles Dodgers and Tampa Bay Rays face off on Tuesday night in Game 6 of the World Series at Globe Life Field.

The Dodgers currently lead the series 3-2 after winning Sunday’s game 4-2.

The Dodgers probably feel like they should have the World Series wrapped up, and they would have they wouldn’t have had the meltdown in Game 4. The good news for the Dodgers they were able to bounce back in a big way scoring two runs in the first inning, and another run in the second inning. Max Muncy had the biggest game in Game 5 having two hits, one run, one walk, and one RBI The Dodgers are facing a strong pitcher in this game, so hitting a home run or two would be very important.

On the other side of this matchup is the Rays who have their backs against the wall now, but this is a team that has been feisty all season. The Rays offense has been inconsistent at best this series and it’s something that is going to need to be better this year. In the two wins, the Dodgers have scored 14 runs total, but in the three losses they only scored seven runs total. In the last game they actually outhit the Dodgers, but they only could manage two hits.

Blake SNell will get the start for the Rays and in his first start of this series he went 4.2 innings giving up two hits and two runs. In this game the Rays are going to need Snell to be lights out.

Tony Gonsolin will get the start for the Dodgers but he has been mostly used as an opener for the team. In his first start against the Rays he went 1,1 innings giving up one home run.

I don’t like the Dodgers using an opener against Blake Snell in this situation and it’s going to cost them. Look for the Rays offense to find success in this one, Blake Snell is going to be lights out, and the Rays will win on the money line.