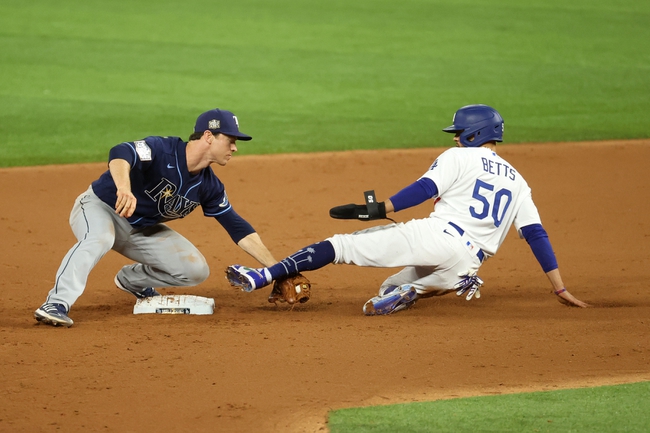 The Tampa Bay Rays and Los Angeles Dodgers face off on Wednesday in Game 2 of the World Series at Globe Life Field.

In the first game of this series it was the Dodgers who came away with an 8-3 victory.

When the Los Angeles Dodgers traded for Mookie Betts, Game 1 of the World Series was exactly what they were hoping for. In the first game, Betts made history being the first player to hit a home run, steal two bases, and score two runs in a World Series. The Dodgers really broke out in the 5th inning driving in our runs, and the Rays couldn’t ever make up for it. Cody Bellinger started the scoring with a two run home run in the 4th inning. Max Muncy also drove in two runs and in this game they need the offense to be good again.

For the Rays they knew facing Clayton Kershaw would be tough, and they struggled against him in Game 1. The Rays were able to drive in two runs in the seven inning after Kershaw was done for the night, but it was too little too late. One positive to come away from the first game was they did score those two runs late in the game and maybe they can build off that momentum. It was Kevin Kiermaier who was able to drive in two runs.

On the mound for the Rays will be Blake Snell who has a 2-2 record and an ERA of 3.20 so far during the postseason. Each of his last couple starts he has gone five innings or less and in this game, they need him to go deeper.

Snell has been good during the postseason and this is going to be a true pitchers duel. Look for both teams to struggle to score, and for this game to stay well under the posted total.