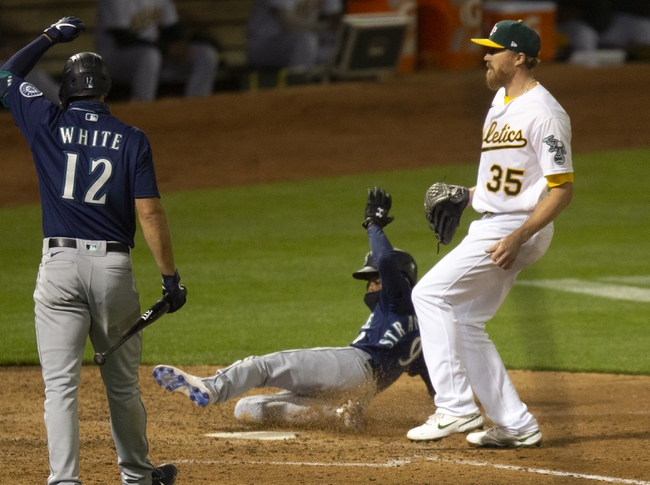 The Seattle Mariners face Oakland Athletics on Saturday, September 26th at Oakland Coliseum for game one of a doubleheader in MLB action.

The Oakland Athletics defeated the Seattle Mariners by the final score of 3-1 on Friday night in game one of this series. This game needed extra innings, as the Mariners and A's were scoreless at 0-0 through nine innings. After the Mariners scored one run in the top of the tenth, the Athletics' Mark Canha hit a walk-off two-run home run to give Oakland its 35th win of the season. The Athletics have already clinched the AL West title at 35-22, as they are set for yet another go in the American League postseason. The Seattle Mariners were already eliminated from playoff contention before Friday's game, but overall this season has not been a disaster for Seattle. A 25-32 record for a young team is not too shabby, and the Mariners will look to end the season on a hot note against a divisional rival.

The Seattle Mariners are projected to bring right-hander Justin Dunn to the mound to face the Athletics in game one of the doubleheader. Dunn is 3-1 with a 4.20 ERA through his first 40.2 innings of the season with the Mariners. Dunn allowed three earned runs through 5.2 innings against the San Diego Padres in his last start.

The Oakland Athletics are projected to bring left-hander Mike Minor to the bump for game one of the doubleheader. Minor is 1-6 with a 5.92 ERA through his first 51.2 innings of the season with the Rangers and A's. Minor allowed six earned runs through 5.0 innings in his most recent start against the San Francisco Giants.

UPDATE: Justus Sheffield will get the start for the Mariners in game one of the doubleheader, with Justin Dunn pitching in game two. I am still going to take the Mariners here, as I think Sheffield has impressed this season as one of the M's top arms in the rotation. I like the plus money with the young Mariners team on the road here.