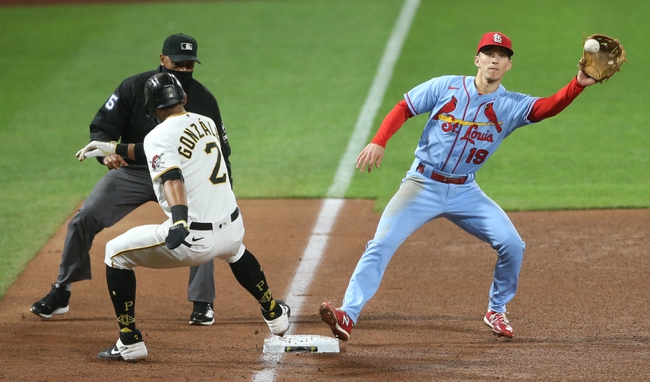 Where to Watch: ATPT, FSMW Stream the MLB Game of the Day all season on ESPN+. Sign up now!

The St. Louis Cardinals look for a win after splitting their last 10 games. The Cardinals have scored 18 runs in their last three games and four or more runs in four of their last six games. The Cardinals have won 10 of their last 11 games when scoring four or more runs. Paul Goldschmidt leads the Cardinals with 48 hits and 19 RBI while Tommy Edman and Kolten Wong have combined for 84 hits and 36 RBI. Jack Flaherty gets the ball, and he is 3-2 with a 5.52 ERA and 33 strikeouts this season. Flaherty is 5-1 with a 1.94 ERA and 47 strikeouts in his career against the Pirates.

The Pittsburgh Pirates need a win after losing 11 of their last 12 games. The Pirates scored 11 runs in their last three games and four or more runs in five of their last 10 games. The Pirates have split their last eight games when scoring four or more runs. Josh Bell leads the Pirates with 40 hits and 11 RBI while Erik Gonzalez and Adam Frazier have combined for 79 hits and 36 RBI. Joe Musgrove gets the ball, and he is 0-5 with a 5.74 ERA and 34 strikeouts this season. Musgrove is 1-7 with a 6.75 ERA and 47 strikeouts in his career against the Cardinals.

Jack Flaherty has allowed 14 runs and 16 hits in his last 10.2 innings while Joe Musgrove has allowed six runs and 12 hits in his last 12 innings. We have two struggling pitchers on the hill who both have season ERAs over five, and yet the run total is single digits. Instead of getting involved with the side in this spot, I'm leaning toward the over eight runs.