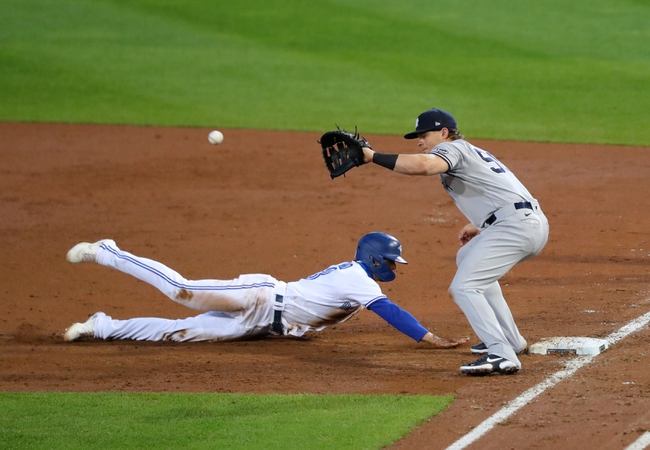 The Toronto Blue Jays face the New York Yankees on Tuesday, September 15th at Yankee Stadium for game one of a three-game series.

The New York Yankees are only a 0.5 game behind the Blue Jays in the AL East standings, as the Bronx Bombers own a record of 26-21 on the year. The Yankees currently own the first wild card spot in the American League. The Yankees are riding a five-game win streak into this series at home, as the Yanks just swept the Orioles in four games at Yankee Stadium this past weekend. The Yankees starting pitchers have really pitched well during this stretch, and the Yankees have only allowed five total runs in their last five games.

The Toronto Blue Jays are set to bring right-hander Taijuan Walker to the mound to face the Yankees. Walker is 3-2 with a 2.95 ERA through his first 42.2 innings of the season. Walker tossed 4.0 shutout innings against the Yankees in his last start on September 8th. Walker allowed five walks in that game; however, so he will have to pitch with a tad more control if he wants to avoid too many base runners in this game.

The New York Yankees will send right-hander Deivi Garcia to the bump for Tuesday's contest. Garcia is 1-1 with a 3.06 ERA through his first 17.2 innings of his big league career. Garcia has pitched well for the Yankees in his limited time in the majors, and he will look to produce yet another strong start for the Yankees on Tuesday.

I am going to take the Yankees here, as they have been rolling recently. The Yankees are starting to come back to life after such a rough stretch a few weeks ago, and I expect them to take game one of this series at home.