The Houston Astros face the Oakland Athletics on Thursday, September 10th at Oakland Coliseum for game five of a five-game series.

The Oakland Athletics took down the Houston Astros via walk-off fashion by the final score of 3-2 on Wednesday night. The Athletics and Astros were tied at 2-2 when Ramon Laureano hit a walk-off single to score the new Athletic on the block in Tommy La Stella. The Athletics have now won three of the first four games of this series, and they are also 6-3 against the defending American League-champion Astros in the season series thus far. The final game of the season series will take place on Thursday, and the Athletics will look to add to their already 5.5 game lead over Houston with a win. The Athletics are 26-15 on the year, while the Astros are 22-22. It is important to remember that the top two spots in each division will earn a postseason spot this season, and Houston is 2.0 games ahead of the Mariners for second in the AL West.

The Houston Astros will bring right-hander Jose Urquidy to the mound to face the Athletics. Urquidy is 0-0 with a 4.91 ERA through his first 3.2 innings of the season. Urquidy made his season debut on September 5th against the Angels. In that start, Urquidy allowed two earned runs on four hits through 3.2 innings.

The Oakland Athletics are set to send left-hander Sean Manaea to the bump for Thursday's contest. Manaea is 3-2 with a 5.09 ERA through his first 35.1 innings of the season with the A's. Manaea allowed one earned run through 5.0 innings in his most recent outing against the Padres.

I am going to take a shot with the Astros in the final game of this series. I do not feel too good with either of these starters on Thursday, so the over may also be worth a look. I think that +134 odds with a decent team are valuable enough for me to take the Astros in this spot, as I think they can score enough for Urquidy and the pen to earn the win. 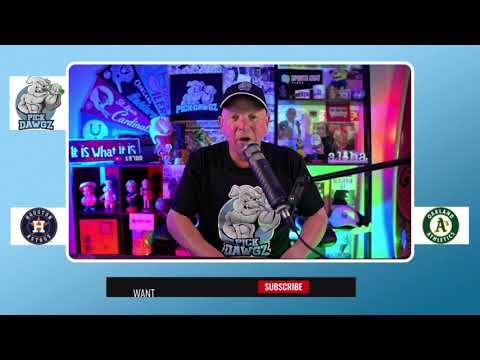