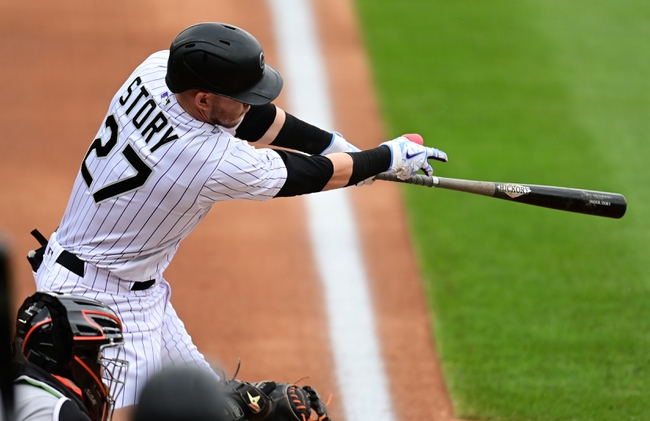 Where to Watch: NBCS BA, ATT SportsNet-R Stream the MLB Game of the Day all season on ESPN+. Sign up now!

The San Francisco Giants and the Colorado Rockies meet in an NL West division matchup in MLB action from Coors Field on Tuesday.

The San Francisco Giants will look to build off of a 4-1 win over the Arizona Diamondbacks in their last outing. Evan Longoria had a pair of RBIs while Alex Dickerson went 2 for 4 with a solo home run and two RBIs as well to round out the scoring for San Francisco in the win. Wilmer Flores added a double while Mauricio Dubon, Brandon Crawford and Pablo Sandoval each had a base knock to finish off the Giants’ offense as a team in the winning effort. Johnny Cueto gave up one run on three hits while striking out six over 6.2 innings of work, not factoring in the decision. Tony Watson got the win in relief to improve to 1-0 while Sam Coonrod got the save his 1st of the year. The Giants did not have a starting pitcher listed at the time that this article was posted.

The Colorado Rockies will try to rebound from a 6-0 loss to the San Diego Padres on Monday night. Daniel Murphy went 2 for 4 with a double while Sam Hilliard, Tony Wolters, Nolan Arenado, Raimel Tapia and Charlie Blackmon each had a base hit to round out the offense for the Rockies in the loss. German Marquez took the loss, falling to 2-5 after allowing five runs on eight hits while striking out seven over six innings of work. Jon Gray will start here and is 2-3 with a 5.45 ERA and 21 strikeouts this season. In his career, Gray is 1-5 with a 5.30 ERA and 47 strikeouts against San Francisco.

I'd be lying if I said the initial thought of Kevin Gausman at Coors Field didn't scare me. However, I've been on the wrong end of a few Jon Gray blowups in my time, and the Rockies just can't seem to put the wins together that they need to contend going forward. San Francisco's been on a solid run of form lately, and while I'm not sure how long it lasts, the fact here is that the Giants are playing the better ball and continue to get no respect from oddsmakers. I'll take the Giants in this one.