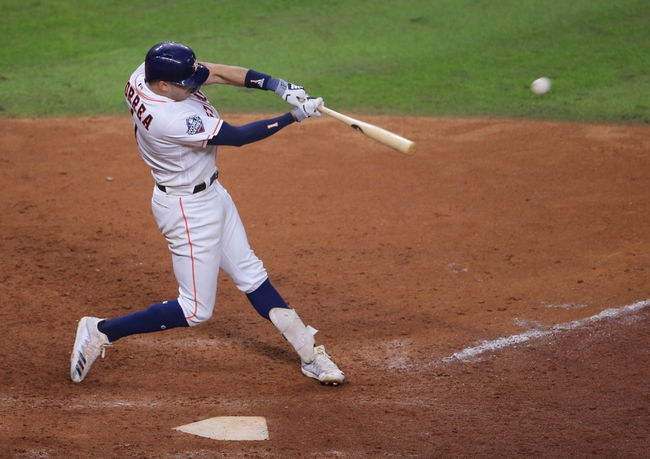 The Washington Nationals and the Houston Astros meet in a winner-take-all game seven of the World Series from Minute Maid Park on Wednesday.

The Washington Nationals will look to win the series after taking game six on Tuesday by a final count of 7-2. Anthony Rendon went 3 for 4 with a home run, a double and five RBIs while Adam Eaton and Juan Soto each belted a solo home run to finish off Washington’s scoring as a team in the win. Trea Turner went 2 for 5 with a double while Howie Kendrick and Yan Gomes each had a base hit to finish off Washington’s offense in victory. Stephen Strasburg got the win after allowing two runs on five hits while striking out seven over 8.1 innings of work. Max Scherzer will start game seven and is 3-0 with a 2.16 ERA and 34 strikeouts this postseason.

The Houston Astros will look to buck the trends and be the first team to win at home in this series after dropping game six on Tuesday. Alex Bregman went 2 for 4 with a solo home run while Jose Altuve added an RBI to finish off Houston’s scoring in the losing effort. George Springer went 2 for 4 with a pair of doubles while Carlos Correa added a double of his own and Josh Reddick also added a base hit as the Astros had just six hits as a team in the loss. Justin Verlander took the loss after giving up three runs on five hits while walking and whiffing three each over five innings of work. Zack Greinke will start game seven and is 0-2 with a 5.30 ERA and 22 strikeouts this postseason.

This has been one heck of a series and you almost got the feeling that that controversial call involving Trea Turner in game six was going to be that moment that turned the series in Houston’s favour and end the series and left us wondering what if with the Nationals. However, the Nationals kept their cool and forced a game seven which writes into the storybook finish for Washington. Scherzer gets scratched from game five, gets a cortisone shot and Washington stays alive to force a game seven and give Mad Max the opportunity to pitch in the biggest game of his career like the gamer that he is. You could just tell watching Scherzer in the bullpen that he’s ready to go for this one. Houston is at home and has Greinke going, and this is the kind of situation that he was brought in for. The issue is that the Nationals are 5-0 in Scherzer’s 5 appearances this postseason and if there was a guy I’d want on my side in a spot like this, it’s Scherzer. The road team has won all 6 games in this series so why not try one more time. This is going to be one heck of a game, but I just see the Nationals bringing all their momentum in at the right time for Scherzer, so I’ll take Washington here to win the series and bring Washington its first World Series title since 1924.