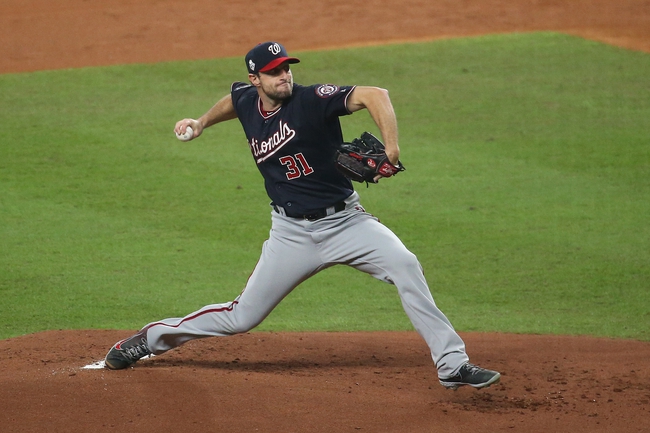 The Washington Nationals will win their first World Series in franchise history with a victory here. The Nationals offense found some life by scoring seven runs in their game six win, which is fresh off scoring a combined three runs in their three losses in DC. The Washington Nationals have won 34 straight games when scoring at least five runs. Anthony Rendon leads the Nationals with 16 hits and nine RBI while Howie Kendrick and Juan Soto have combined for 30 hits and 22 RBI. Max Scherzer gets the ball, and he was 11-7 with a 2.92 ERA and 243 strikeouts this season. Scherzer is 7-5 with a 3.36 ERA and 134 strikeouts in his postseason career.

The Houston Astros will win their second World Series in the last three years with a victory here. The Astros have been held to four or less runs in four of their last five home games with their game six loss. The Houston Astros have lost seven of their last 10 games when scoring four or less runs. Jose Altuve leads the Astros with 24 hits and eight RBI while Michael Brantley and Yuli Gurriel have combined for 35 hits and 16 RBI. Zack Greinke gets the ball, and he was 18-5 with a 2.93 ERA and 187 strikeouts this season. Greinke is 3-6 with a 4.31 ERA and 81 strikeouts in his postseason career.

Scherzer has allowed 14 hits and six runs this postseason in 25 innings, but he was dealing with a previous injury and did warm up in game six, so who knows how he'll feel entering this contest. Greinke has allowed 22 hits and 11 runs in 18.2 innings this postseason and the Astros are 10-4 with him on the mound since coming from Arizona. You'd think the Houston Astros would get it done here, but I can't lay juice with Greinke on the mound, a pitcher who hasn't been good this postseason. There's also the weird trend of the road team winning every game this series. Anything can happen in a game seven, but I want the more trustworthy starting pitcher and the plus money.

With this being the end of the baseball season, thanks for following along and we’ll see you again in a few months.