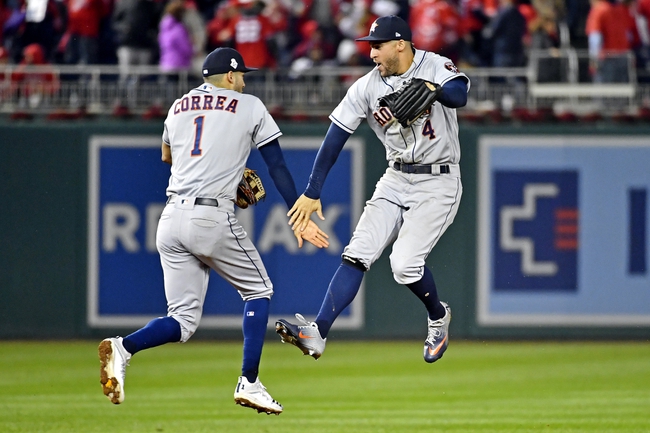 The Houston Astros and the Washington Nationals will match up for Game 5 of the World Series on Sunday.

Washington jumped out to an improbable 2-0 series lead here, posting a 5-4 victory in Game 1 and a 12-3 blowout win on Wednesday in Game 2. Houston struck back Friday 4-1 to show some life in Game 3, then cruised to an 8-1 victory in the Saturday Game 4 to even the set at 2-2 apiece.

Over on the Nationals’ side, they were going to go with Max Scherzer here, but he was a late scratch due to neck spasms. It'll be Joe Ross in the starting role.

The Astros are 4-1 in their last five road games and 22-5 in their last 27 Sunday games. Houston is 8-0 in Cole’s last eight road starts and 5-0 in his last five Sunday starts.

Cole was pushed for five runs on eight hits in seven innings in Game 1, which is an odd situation for a very dominant pitcher to be in. It was his first loss since May 22, and he’ll be looking to get some revenge here.

With Scherzer out, it's obviously a huge blow to the Nationals but pick-wise it doesn't make much difference to me; it's just a fatter number. Hopefully Scherzer can return for Game 6 or 7. Washington will need him.

The Astros seem to be gaining their momentum back after a couple of missteps in the first two games, and it feels full steam ahead for Houston here.