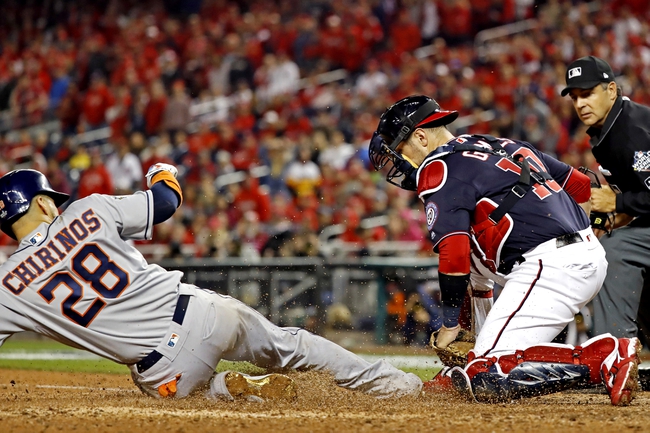 The Houston Astros and the Washington Nationals meet in game five of the World Series from Nationals Park in MLB action on Sunday night.

The Houston Astros will look to head home leading after evening the series back up at 2-2 following an 8-1 win in game four on Saturday. Alex Bregman had a grand slam as part of his 3 for 5 night with five RBIs while Robinson Chirinios went 2 for 5 with a home run, a double and two RBIs. Yuli Gurriel added an RBI to round out Houston’s scoring while Michael Brantley had three hits and Jose Altuve and Jake Marisnick each had two hits as well to cap off Houston’s offense as a team in the win. Jose Urquidy got the win after tossing five shutout innings, giving up just two hits while striking out four. Gerrit Cole will start game five and is 3-1 with a 1.82 ERA and 38 strikeouts this postseason.

The Washington Nationals will look to bounce back after dropping game four on Saturday, letting Houston tie the series up in the process. Juan Soto put up Washington’s lone RBI while Anthony Rendon went 2 for 4 and Yan Gomes added a double. Victor Robles chipped in a base hit of his own as the Nationals cranked out just four hits as a team in the losing effort. Patrick Corbin ended up with the loss after allowing four runs on seven hits while striking out five over six innings of work. Max Scherzer will start game five and is 3-0 with a 2.16 ERA and 34 strikeouts this postseason.

I get that Houston has a ton of momentum after winning back-to-back games and Cole may be the perfect guy to help maintain that momentum and give the Astros a chance to complete the comeback and close things out in six. However, the Nationals have already gotten to Cole once in this series, and once again, we get plus money with Max Scherzer, which is a rarity in itself. Mad Max is one of the most competitive pitchers in all of baseball, and his performance in game one was downright nasty. The Nationals need this game if they’re serious about closing things out in Houston as Strasburg and Scherzer as a 1-2 punch are going to be their best chance on the mound. I’ll take a shot with Washington and the plus money in what should be one hell of a pitching matchup.