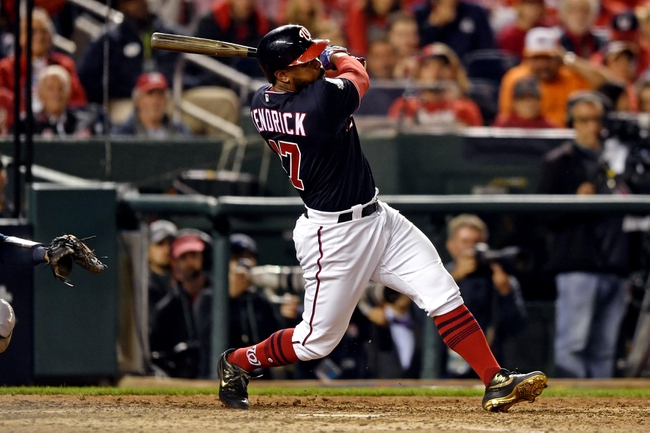 The Houston Astros and the Washington Nationals meet in game four of the World Series from Nationals Park on Saturday night.

The Houston Astros will look to even up the series after making it 2-1 with a 4-1 victory in game three on Friday. Michael Brantley went 2 for 4 with two RBIs while Robinson Chirinos had a solo home run and Josh Reddick chopped in an RBI of his own to cap off Houston’s scoring as a team in victory. Jose Altuve had a pair of doubles while George Springer had a pair of hits and Carlos Correa added a two bagger of his own. Yuli Gurriel added a base hit of his own to finish off the Astros’ offense in the winning effort. Zack Greinke allowed one run on seven hits while walking three and striking out six over 4.2 innings of work, not factoring in the decision, while Josh James got the win and Roberto Osuna closed out the 9th for the save. Jose Urquidy will start game four and is 0-0 with a 2.08 ERA and 8 strikeouts this postseason.

The Washington Nationals will look to bounce back after a frustrating loss in game three on Friday. Victor Robles had a triple and Washington’s lone RBI as a team in the loss. Asdrubal Cabrera went 2 for 4 with a double while Anthony Rendon also had a double and Adam Eaton had two hits as well. Trea Turner, Ryan Zimmerman and Howie Kendrick each had a base hit to cap off the Nats’ offense as a team in the losing effort. Anibal Sanchez ended up with the loss after allowing all four runs on ten hits while striking out four over 5.1 innings of work. Patrick Corbin will start game four and is 1-2 with a 6.91 ERA and 28 strikeouts this postseason.

I get the feeling that Houston is going to employ a bullpen game here with Urquidy getting the starting role, so even with Friday’s win, I’m not overly comfortable in backing Houston if that’s the case and even if it isn't, while Urquidy has been pretty good in limited action this postseason, he's not a pitcher I'm looking to back in a game four in the World Series. On the other hand, Corbin has gone from being dominant at home in the regular season to allowing ten runs in 5.2 innings in his two postseason appearances at home this season. Instead, I’m going to side with the over as I see both teams scratching some offense together and combining for a double digit total when all is said and done.