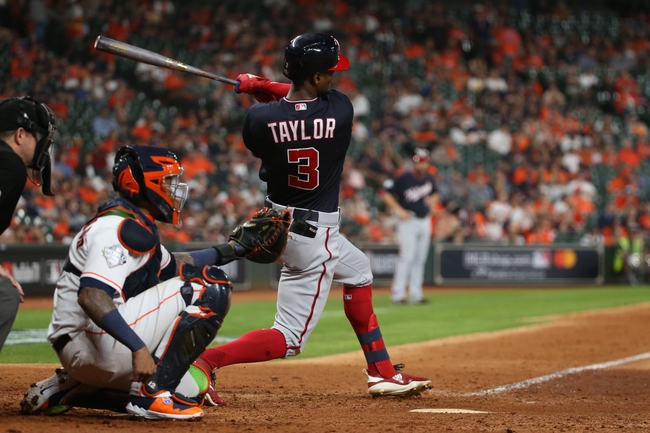 The Houston Astros and the Washington Nationals meet in game three of the World Series from Nationals Park on Friday night.

The Houston Astros will look to bounce back after going down 0-2 in the series at home following a 12-3 beatdown in game two on Wednesday. All of Houston’s damage on the board came via the long ball as Alex Bregman hit a two run home run and Martin Maldonado hit a solo home run. Jose Altuve went 3 for 5 with a double while Michael Brantley went 2 for 4 and Yuli Gurriel added a double. Yordan Alvarez added a base hit of his own to finish off Houston’s offense as a team in the losing effort. Justin Verlander took the loss after allowing four runs on seven hits while walking three and striking out six over six innings of work. Zack Greinke will start game three and is 0-2 with a 6.43ERA and 16 strikeouts this postseason.

The Washington Nationals will look to take a commanding 3-0 series lead after stealing home field with a pair of wins following Wednesday’s victory. Asdrubal Cabrera led the Nats by going 2 for 5 with three RBIs while Adam Eaton and Anthony Rendon each had two RBIs with Eaton belting a home run while Rendon chipped in a double. Kurt Suzuki and Michael A. Taylor each added a solo home run while Howie Kendrick and Ryan Zimmerman each had an RBI. Juan Soto had a double while Trea Turner added a base hit as well to finish off Washington’s offense as a team in the victory. Stephen Strasburg got the win after giving up two runs on seven hits while striking out seven over six innings of work. Anibal Sanchez will start game three and is 1-0 with a 0.71 ERA and 14 strikeouts this postseason.

I get why Houston and a low line is tempting as the Astros need this game to get back into the series and this kind of situation is why the ‘Stros brought in a solid veteran arm like Greinke. However, Greinke hasn’t pitched like a veteran that’s ready for this high-pressure situation getting hit hard more often than not in these playoffs and like it or not, Washington’s been the much better team in the first two games of the series. We keep getting these value lines with Washington, and while it’s not heavy plus money like the first two games, we’re still getting plus money with a Washington team that’s won eight straight playoff games and has a pitcher in Sanchez going who has been pretty much lights out this postseason for the Nationals. Based on value and what we’ve seen so far, I have to back Washington here.