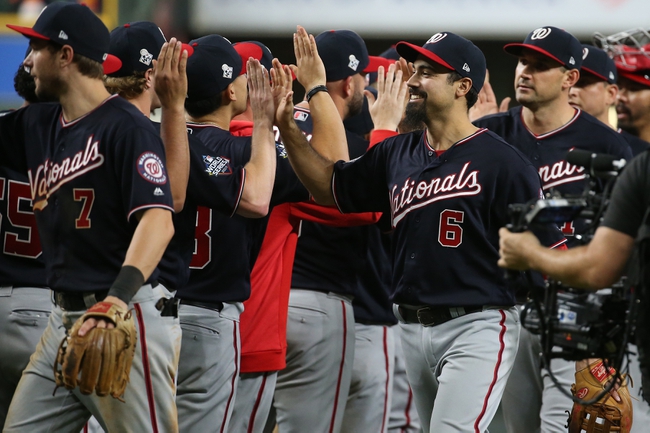 The Houston Astros and the Washington Nationals will match up for Game 3 of the World Series on Friday in MLB action.

In Game 1 on Tuesday, the Nationals eked out a 5-4 victory to take an early series lead. In Wednesday’s Game 2, Washington kept it going, crushing in six runs in the seventh inning to break the game open and vaulting out to a 12-3 victory and a huge 2-0 advantage in the series coming back home.

Greinke has been a little hit and miss this postseason, but over his last two starts he’s put up a 3.48 ERA in 10.1 innings of work. Perhaps an overlooked asset here is his bat, however. Greinke put up eight extra-base hits and three homers this season.

As for Sanchez, this is his second World Series start in his career, but the other was all the way back in 2012 with the Tigers. He’s got a nice 0.71 ERA in 12.2 innings across two starts this playoffs, though.

The Nationals have gotten off to a really, really, really, (REALLY) good start in two games, and coming home should serve as a nice lift to keep things going. All things considered however, the Astros are still the better team when both squads are at their best (or they’re supposed to be, anyway). I’m just going to stick with Houston here. That sounds a little silly with the Astros down 0-2, but sooner or later they’ve got to figure things out. (Right?)