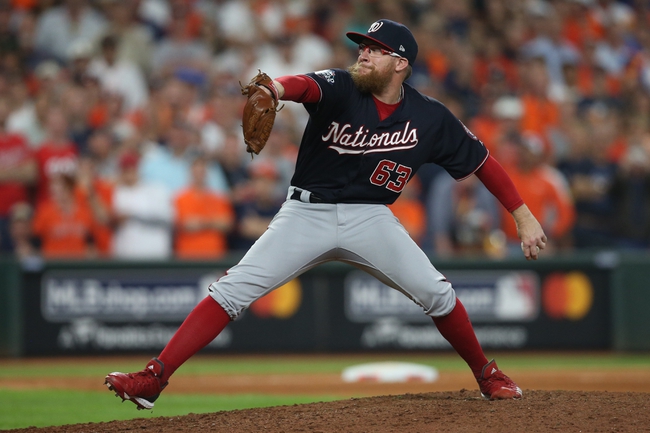 The Washington Nationals and the Houston Astros meet in game two of the World Series from Minute Maid Park on Wednesday.

The Washington Nationals will look to make some more noise after starting the series with a 5-4 win in game one on Wednesday. Juan Soto went 3 for 4 with a home run, a double and three RBIs while Ryan Zimmerman had a solo home run and Adam Eaton went 2 for 4 with an RBI of his own to finish off Washington’s scoring as a team in the win. Trea Turenr, Asdrubal Cabrera and Victor Robles each had a base hit to cap off Washington’s offense as a team in the victory. Max Scherzer got the win after giving up two runs on five hits while striking out seven over five innings of work. Sean Doolittle closed things out with 1.1 innings of relief in the 8th and 9th. Stephen Strasburg will start game two and is 3-0 with a 1.64 ERA and 33 strikeouts this postseason.

The Houston Astros will look to rebound and even up the series after dropping the series opener on Wednesday. George Springer and Yuli Gurriel each had two hits with a double and two RBIs with Springer adding a home run as well. Yordan Alvarez also had two hits while Jose Altuve, Michael Brantley, Carlos Correa and Kyle Tucker each had a base hit as well in the defeat for the Astros. Gerrit Cole ended up with his first loss since May 22nd after allowing five runs on eight hits while striking out six over seven innings of work. Justin Verlander will start game two and is 1-2 with a 3.70 ERA and 29 strikeouts this postseason.

Houston being favored at home again makes sense as this could be considered a must-win for the Houston Astros to get back into the series. However, Verlander’s been touched up for four runs twice this postseason and he hasn’t been the dominant pitcher that we were accustomed to seeing in the regular season. Strasburg’s been tough to crack this postseason for opposing teams and the Nationals are just on a roll right now, winning seven straight since game three of the NLDS. I think there’s some value to be had with the Nationals and the plus money so I’m going to try for it again on Wednesday.

Get Premium Picks Start Winning Now »
The pick in this article is the opinion of the writer, not a PickDawgz site consensus.
Previous Pick
Houston Astros vs. Washington Nationals - 10/22/19 MLB World Series Game 1 Pick, Odds, and Prediction
Next Pick
Washington Nationals vs. Houston Astros - 10/25/19 MLB Pick, Odds, and Prediction