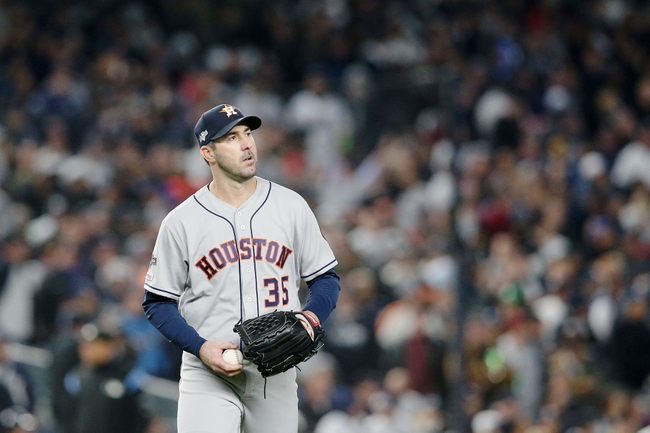 The Washington Nationals and Houston Astros meet Wednesday in game two of the World Series at Minute Maid Park.

The Washington Nationals can take complete control of this series with a win here and a 2-0 lead. The Nationals got to Gerrit Cole in their game one victory and ended up scoring at least five runs for the fifth time in their last seven games. The Washington Nationals have won 31 straight games when scoring at least five runs. Anthony Rendon leads the Nationals with 12 hits and seven RBI while Trea Turner and Howie Kendrick have combined for 23 hits and 12 RBI. Stephen Strasburg gets the ball, and he was 18-6 with a 3.32 ERA and 251 strikeouts this season. Strasburg is 4-2 with a 1.10 ERA and 57 strikeouts in his postseason career.

The Houston Astros need a win here to even things up before going back to DC. The Astros pitching staff has allowed 13 runs in their last three games and they’re 1-5 this postseason when allowing four or more runs. The Houston Astros have lost two or more games in a row just twice since August 18. Jose Altuve leads the Astros with 15 hits and eight RBI while Michael Brantley and Alex Bregman have combined for 20 hits and six RBI. Justin Verlander gets the ball, and he was 21-6 with a 2.58 ERA and 300 strikeouts this season. Verlander is 14-9 with a 3.26 ERA and 196 strikeouts in his postseason career.

Strasburg has allowed 36 hits and 12 earned runs in his last 52 innings, and he has a 1.64 ERA in 22 postseason innings this year. Verlander has allowed 41 hits and 19 runs in his last 63.1 innings, and he has a 3.70 ERA in 24.1 innings this postseason. The same reason I took the Nationals in game one is why I'm taking them here as well. We're getting an ace quality pitcher and two times our money. Yes, the Astros are stacked and have been freakishly good at home, and they bounced back when losing the first game of the series against the Yankees. But in terms of value, you can't go wrong with the Nats and these prices. These are quality starters the Nationals are throwing out there and oddsmakers are treating them Edwin Jackson or something. We understand the Astros are good, but I don't understand these out of control prices.

Get Premium Picks Start Winning Now »
The pick in this article is the opinion of the writer, not a Pick Dawgz site consensus.
Previous Pick
Houston Astros vs. Washington Nationals - 10/22/19 MLB World Series Game 1 Pick, Odds, and Prediction
Next Pick
Washington Nationals vs. Houston Astros - 10/25/19 MLB Pick, Odds, and Prediction