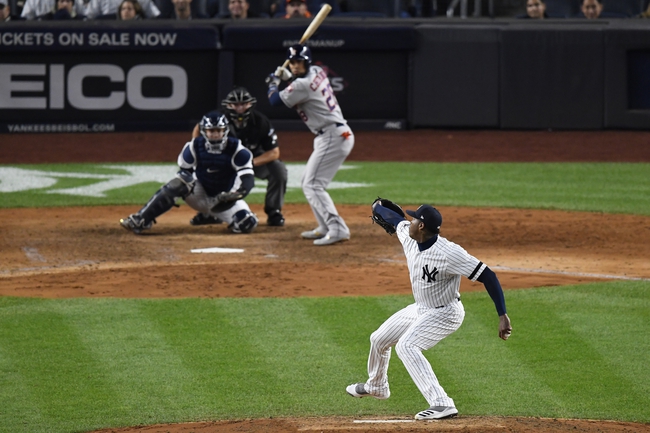 Where to Watch: FS-1 Stream the MLB Game of the Day all season on ESPN+. Sign up now!

The New York Yankees and the Houston Astros meet in game six of the ALCS in MLB action from Minute Maid Park on Saturday night.

The New York Yankees will look to tie up the series and force a game seven after taking game five by a final score of 4-1 on Friday. All of New York’s damage on the board came via the long ball as Aaron Hicks hit a three run home run and DJ LeMahieu started things off with a solo home run. Gleyber Torres had a double while Aaron Judge and Didi Gregorius each had a base hit as the Yanks had just five hits as a team in the winning effort. James Paxton got the win after allowing one run on four hits while walking four and striking out nine over six innings of work. Aroldis Chapman closed out the 9th for his 1st save of the series.

The Houston Astros will look to bounce back and close things out at home after dropping game five on Friday. George Springer went 2 for 5 while Alex Bregman, Carlos Correa and Jake Marisnick each had a base hit as the Astros cranked out five hits as a team in the losing effort. Justin Verlander ended up with the loss after allowing four runs on five hits while striking out nine over seven innings of work.

Both teams are expected to implement a bullpen game strategy for this one, so it could genuinely go either way, which means I’m not overly comfortable backing a side here. Instead, I’m going to side with the under. You have to imagine that these teams aren’t going to be on a flight until midnight or so and then having to turnaround and play a crucial game six with a decent amount of travel involved is going to take its toll. I envision there being some tired bodies on Saturday and it doesn’t hurt that the majority of these games have been low-scoring to begin with. I’ll take the under in this one.