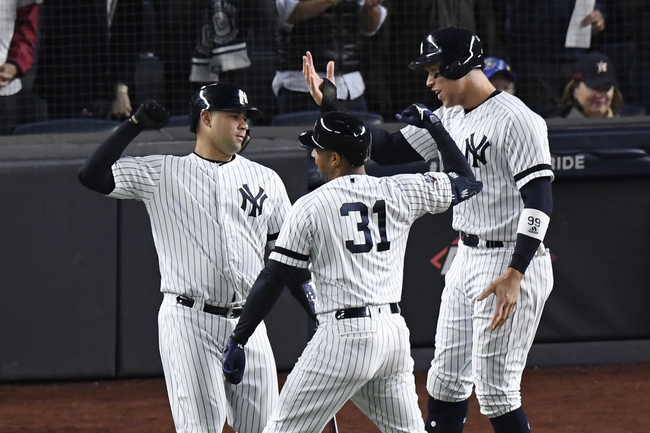 The New York Yankees and Houston Astros meet Saturday in game six of the ALCS at Minute Maid Park.

The New York Yankees need another win to save their season and force a game seven on Sunday. The Yankees finally got going offensively, scoring four runs in their game six victory, which was the same number of runs they scored in game three and four combined. The New York Yankees have won 10 of their last 11 games when scoring at least four runs. DJ LeMahieu leads the Yankees with 12 hits and five RBI while Gleyber Torres and Aaron Judge have combined for 19 hits and 12 RBI. The New York Yankees will play a bullpen game in this contest, so starting pitcher doesn’t matter much.

The Houston Astros would advance to their second World Series in the last three years with a victory here. The Astros offense struggled in their game six loss, and they’ve now been held to three or less runs in six of their last nine games. While the pitching is great and they’re still the team to beat, the Houston Astros keep making it tough on themselves with a lack of consistent offense game in and game out. Jose Altuve leads the Astros with 13 hits and six RBI while Michael Brantley and Alex Bregman have combined for 19 hits and five RBI. The Houston Astros will play a bullpen game in this contest, so starting pitcher doesn’t matter much.

I'm leaning toward the Yankees in a bullpen game given the depth of their bullpen and the fact they're used to playing this style of game and had a ton of success all season doing it. However, I've had no success outside of game one picking the Yankees in this series, so I'm shying away from that and leaning toward the over. Both offenses are good enough to take advantage of mistakes each bullpen makes, and we're due for some fireworks after both offenses have struggled a bit. I'll update once odds are released.